At Flick of the Finger, we love Kendal Calling. It’s one of our favourite festivals. Whilst the now familiar rain may dampen pretty much everything on and around us, the one thing it can never touch is our spirits.

Set in picturesque countryside, with 11 stages, a quirky woodland area and enough fancy dress outfits to rival the fez-wearing shopkeeper in Mr Benn, there’s always one place in particular we keep being drawn back to; the Tim Peaks Diner.

Brainchild of The Charlatans frontman Tim Burgess, the log cabin diner is decked out with booth style seating and a crack team of baristas, providing the hung-over and weary with a much needed rest and caffeine fix. If you have ever been before you will know this is no ordinary diner though. In between the chitter-chatter and hiss of the coffee machines you will find live bands, DJ sets, guests and surprises galore. In fact there should be a sign hung above the door that says ‘Expect the Unexpected.’

On Friday the very glamorous Becki Fishwick, performed for the first time at the festival. Exquisitely dressed in 1950s attire, the audience was treated to beautiful sounding jazz with a twist, putting her own style on hits from the likes of The Charlatans and Run DMC. Rumours of the first of the secret sets were also doing the rounds, with talk of a certain three-piece from Doncaster who have a knack of blowing the bloody doors off, Italian Job stylee. Seeing the trademark painted eyes of the frontman walking onto the stage, the crowd were not disappointed. The Blinders are always a bit special to watch and in such an intimate venue it felt exciting, intense and hot.

Saturday was one for the families with the Rockin Rhinos blasting out a few numbers including a turbo charged ‘Wheels on the Bus’. They describe themselves as The Banana Splits, meets the Ramones and quite honestly the parents seemed to be having just as much fun. 6 Music early bird Chris Hawkins was in attendance doing his thing, with CBeebies legend, Alex Winters heading up Tiny Tim Peaks, which was located outside and involved stories, games and craft making. There was even a workshop by Kirk Whitehouse aka Mr ‘Smashed Hits’ with kids smashing up records with a hammer and using the pieces to create some amazing art (cue lots of nervous looking parents planning on padlocking their collection when they get home, just in case). 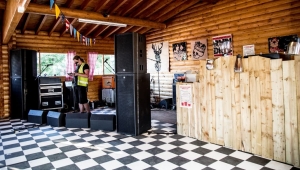 Line of Duty and Misfits star Craig Parkinson was also there doing a live recording for his award winning Two Shot Podcast. You could hear a pin drop in the usually bustling diner as Craig chatted with This is England actor Andrew Ellis about, well everything you can think of really. It was utterly fascinating and almost felt like you were eavesdropping on a dead interesting conversation between two mates. Whispers of another secret gig started circulating and straight after a FOFT favourite Yucatan, Tim Burgess, Mark Collins and Pete Salisbury took to the stage for a cracking Charlatans set including a beautiful version of ‘The Only One I Know’. The diner was literally bursting at the seams at this point, with noses pressed against the window by those not lucky enough to get in.

The rain showed no sign of letting up on Sunday but then again neither did the diner with a set from Deja Vega which turned out to be one of the absolute highlights of the weekend. Now this band is loud. My Bloody Valentine loud. Internal organs were actually vibrating, but what a noise. Brilliant tripped out psych drones that had a whole room literally rocking out. You could tell from the presence of security and large crowds gathering that the word had got around that The Libertines were also playing a secret gig ahead of their headliner slot on the main stage. There were so many people trying to get in and sadly we weren’t one of them, but we did manage to listen through the door as they belted out 40 minutes of favourites such as ‘Albion, ‘What Katie Did’ and even a nod to the Charlatans, with their version of ‘The Only One I Know’. It’s fair to say that everyone was enjoying themselves with Pete and Carl even staying on afterwards to do a few tunes with Jack Jones from Trampolene. 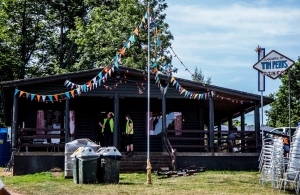 The last band we saw on Sunday evening was five piece indie-punk outfit, Average Sex, and after a long and heavy weekend, they were just what was needed. Their energy was infectious with the singer looking like she was having the best time ever, jumping around and dancing with her friends in the audience. You couldn’t help but enjoy yourself with her. In fact she was a perfect visual representation of the whole weekend as a whole.

Unfortunately it’s impossible to cover everything that happens at the diner. There is so much going on, inside and out. As well as brilliant music and Dj sets, there are food stalls selling the best crepes, cakes, pizza and paella the FOTF team have tasted, amazing Tim Peaks merchandise such as t-shirts, deckchairs and cushions and even a place to get your wellies customised and spray painted. Don’t be surprised if you find yourselves enjoying a drink next to the likes of Paddy Considine, Denise Johnson, Susan Lynch, Dave Haslam and Ian Rankin like we did though .Who needs Carlsberg to do festivals when you’ve got the Tim Peaks Diner? What a damn fine place to be.

About the Author: Sarah Wakefield