In three short years, the Vegan Camp Out has grown from 400 likeminded people in a field with one food vendor. To last year selling out to over 5,000 attendees who had flown in from over thirty countries around the world. This year Vegan Camp Out 2019 looks to serve up an incredible weekend in the East Midlands with an outstanding wealth of activities and artists to enjoy.

The Vegan Camp Out 2019 is now the world’s biggest vegan camping festival. Where you can spend your days participating in activism workshops, learning new tips from vegan chefs and enjoying outdoor yoga. Notice we have yet even mentioned the stunning number of delicious vegan food options to enjoy. Then when the sun sets you can dance into the night with a variety of DJs providing a diverse mix of music for everyone to enjoy.

With an extensive programme of talks, discussions and workshops hosted by an impressive and diverse group of people. There’ll be opportunities to learn and be inspired by the concepts and strategies of animal advocacy and the choices we make. The line-up includes the Avant-Garde Vegan aka Gaz Oakley, the chef is well known for posting recipes and method shots of his cooking which he shares with his 260,000 Instagram followers. The Avant-Garde Vegan’s debut cookbook Vegan 100 was released last year and he recently collaborated with Wagamama on his own signature dish called avantgard’n. 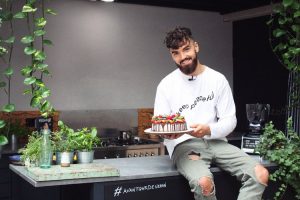 Vegan health educator Dr Michael Klaperwill also be speaking. Dr.Klaperwill served on the Nutrition and Preventive Medicine Task Force of the American Medical Student Association (AMSA), where he is a member of its Board of Advisors. He’s the author of books such as Vegan Nutrition: Pure and Simple and appeared in several documentary films related to vegan diet and practice, including Eat This, Cowspiracy and What the Health. Also joining the line-up is Welsh professional skateboarder, stunt performer and online Chef Matt Pritchard. Pritchard now has his own plant-based cooking channel on YouTube after becoming vegan four years ago.

Take a look at last years Vegan Camp Out.

Looks like incredible fun right? However, festivals are a real concern for people with active environmental concerns. Well, Vegan Camp Out 2019 is taking responsibility and making their festival as sustainable in every way they can while also making it accessible for stallholders and caterers all the while remaining committed to lowering their environmental impact and being as zero waste as possible. They achieve this with active recycling, biodegradable plastic alternatives and supporting car sharing among attendees as well as many other proactive measures.

So when the sun starts to set it is time for the music. Zak Abel, a Moroccan-English singer, songwriter and musician will headline the music stage on Friday. His first single was Unstable has been streamed over 36 million times on Spotify alone. Headling the music stage on Saturday night will be Akala. The rapper, journalist, author, poet and political activist hails from Kentish Town and was voted the Best Hip Hop Act at the MOBO Awards 2016. 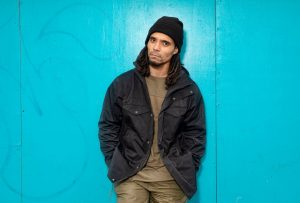 The food oh don’t worry there will be a huge selection. Vegan Camp Out 2019 wants to keep the vendors as a special surprise this year. Don’t worry you’ll find pizza, kebab, smoothies, juices, Indian, ice cream, cakes, burgers, hot-dogs and yes all vegan. Plus there will be gluten-free and raw options available too.

Tickets are on sale now and with an adult weekend ticket, including camping, at £45.00 and children £25.00 for a full weekend packed with amazing people who are passionate about a variety of important topics and some great nights dancing thrown in too.  For more information about every aspect of the Vegan Camp Out including further line-up details, ticket purchasing links, directions and so so so much more head to the Vegan Camp Out’s official website, Facebook page and Twitter from where they tweet as @VeganCampOut. 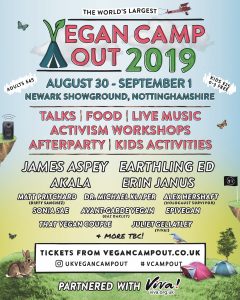