Enter Shikari have been the second headline act to be announced joining At The Drive In, who have announced that this will be their only UK show this year.

Boston Manor, Black Foxxes, Conjurer, SHVPES, Holding Absence, Holiday Oscar, Chapter and Verse and Loathes have also been announced for the three day festival. With more bands still set to be announced, it looks like 2000 Trees is going to have a jam packed line-up this year!

Tickets go on sale tomorrow (1st Feb) at 9am. 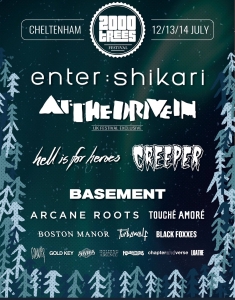