Skip to content
Bluedot 2018: An Unparalleled And Totally Unique Weekend.

One Small Step For Man, One Giant Leap For Festival Kind…

For the seasoned festival goer it’s becoming increasingly difficult to choose where to spend your hard earned cash, with so many festivals to choose from up and down the country, not to mention the booming european big hitters.

With well over 200 festivals in the UK alone, how do you choose which festival to go to and more importantly, what sets them all apart? Its a tough one…

What type of festival goer does Bluedot attract? Well it would be easier to say who it doesn’t attract and that would be your scantily-clad, heavily intoxicated teens, ultimately failing at proving how cool they are to the world. The positive knock on effects of this is that there are no queues at bars, toilets are very clean (as far as festival toilets go), no fighting or and any kind of trouble! One would say it’s probably by design not coincidence, however it just makes for a much more enjoyable weekend. There are multiple reasons why someone would buy tickets to any festival. The obvious reason being the headliners, however the location and just for the simple fact that it could be truly unique and totally different to any other event, are probably good reasons too.

Those who have been to any of the first 3 Bluedot festivals would probably agree that all the above reasons come into play in a big way at Bluedot however there is a strong emphasis on the latter, which incorporates several features of its own such as, the fact that the location is Jodrell Bank Discovery Centre, the fact that the festival really encourages both young children and adults of all ages to explore and ask…. why? Science, arts, technology, space and giving something back all play a large part in the festival. You don’t see much litter at Bluedot as the plastic pint glasses are reused and recycling bins are scattered everywhere. Even some of the festival food, is grown just a couple of miles from the site, delivering the important message of making our planet more sustainable.

One of the most popular features is the opportunity to sit in, on In Conversations with leading experts and highly regarded Astro Astrophysicists such as Tim O’Brien and Philippa Browning. Its talks like these that sets Bluedot a part. That’s all before anyone plugs in an instrument!

Across the site the layout allows you to find your bearings quite easily. The stages and tents are evenly spaced with no sound leakage which is great and with as many food outlets to match that of the genres of music and bands, anyone who is keen to explore and try something new, is in the right place!

The music at Bluedot is a heavy focused on Electronica, Synth Pop and DJ’s that wouldn’t be a miss on the Ibiza, superclub stages. Not your usual Indie moshing lineup however that said, you’ll still see guitar based bands but be sure – they’ll definitely have a synth or keyboard player in their bands lineup, which really fits in with the overall scientific feel and technological themed weekend. It was half way in to the festival on Saturday afternoon and 200 acts, talks and activities had already graced the stages and grounds of Bluedot 2018. Way too many to individually review however stand out acts were: 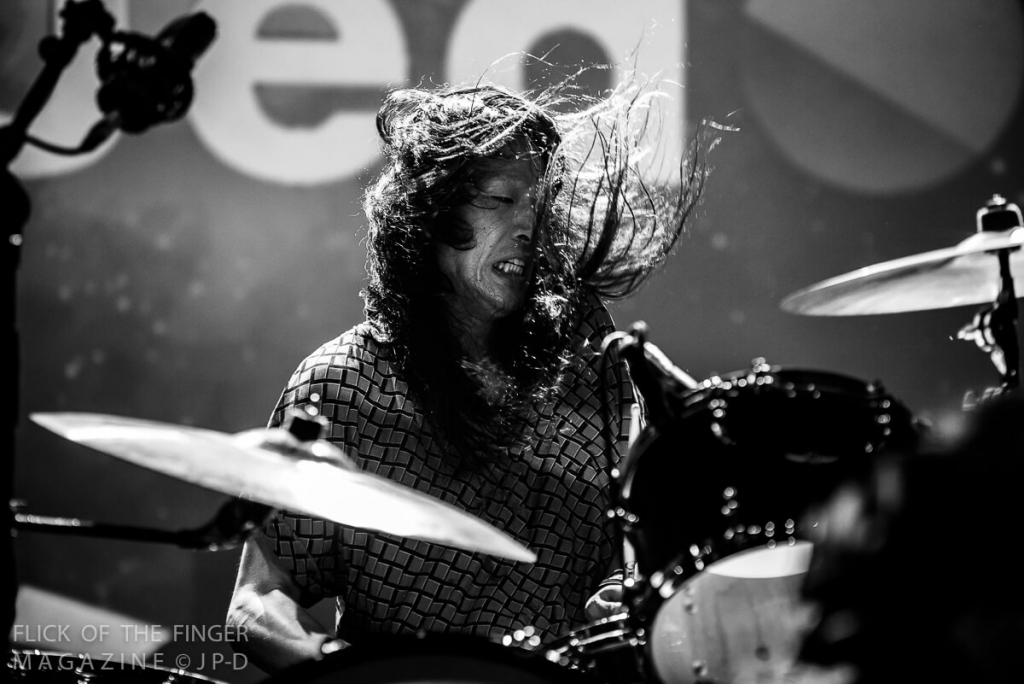 Acid Mothers Temple: An amazing stage presence with a drummer who I couldn’t keep with with, the band Encompassing musicians, dancers, artists, farmers, channellers, ex-yakuza, mermaid researchers and professional vagrants, the collective has always had at its core a dedication to improvised music. A totally unique band and most enjoyable to watch.

Booka Shade: Booka Shade are a Berlin based DJ/Producer duo and being a visitor of Ibiza for over a decade myself, I’ve always seemed to miss them on the White Isle whilst they were performing there. To catch them 20 minutes down the road from where I live was great! 20 years in to their career with half a dozen albums behind them there is no wonder they’re an household name in the dj circuit and scene. Well worth 2 hours of anyone’s time. 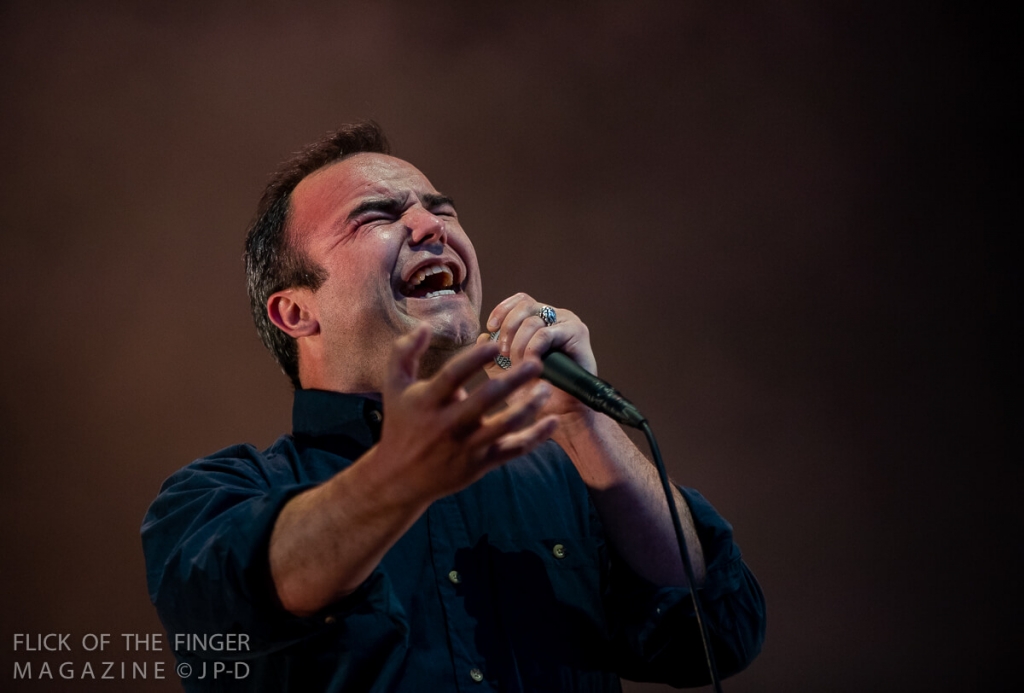 Future Islands: A stand out band but for all the wrong reasons I’m afraid. Cringy dad dancing, ultra tight pants and some crazy growling vocal. Many people in the crowd loved it, personally I just didn’t get it. Sorry guys. 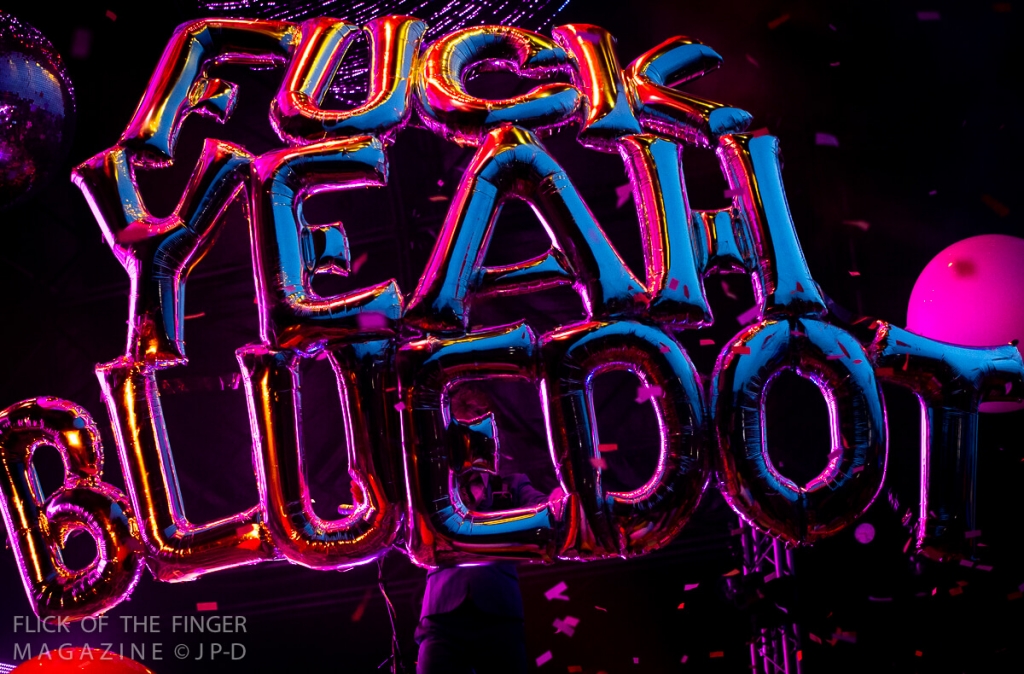 The Flaming Lips: Fronted by all round nice guy and funny man, Wayne Coyle who also took part in an In Conversation with Tim O’Brien earlier that Friday afternoon and the band headlined that Friday evening. The Flaming lips brought colour, flamboyance and extravagance to the main stage as they closed the Friday evening. Admittedly, I didn’t know many of their songs but they were very entertaining and summed up the whole weekend with one inflatable… 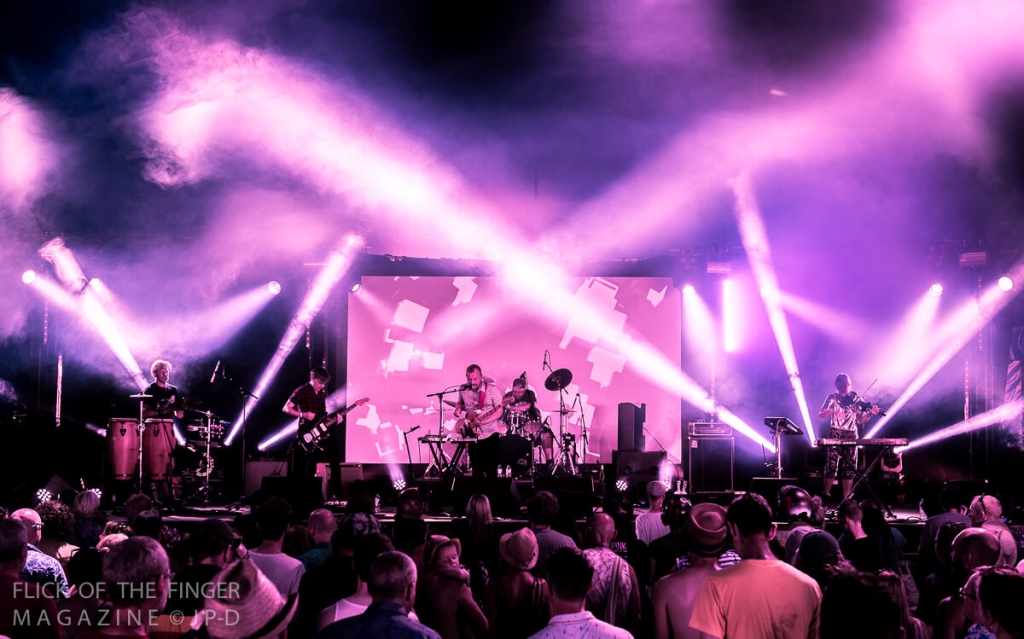 Hello Cosmos: Having recently released their debut single ‘Raise The Dawn’ which received a FOTF 5* review, It was nice to see the band play on a larger stage. If you find it hard to pigeonhole a band, then they’re probably one to keep an eye on and that’s exactly what we’ll be doing. Solid music that filled a large tent at 5pm in the afternoon. A close eye at that.

Public Service Broadcasting: Again, another band that didn’t quite do it for me, as I do prefer a good vocal however, they were such a perfect booking for this kind of festival, anyone would think they formed just to play on the main stage of Bluedot. A match made in heaven if there ever was one, with their mostly instrumental performance that encompass’s old recordings of public information films. Very unique.

Crazy P: What a voice with the moves to match and in total contrast to the above. A fantastic addition to the lineup to get the party started for the Sunday evening. By this time, everyone was chilled, everyone knew or had seen each other at least half a dozen times and what better way to bring people even closer together, with some classic house vibes. There’s a reason it’s called the house of love and 15,000 people dancing together in a field is what it’s all about. A FOTF top Pick! 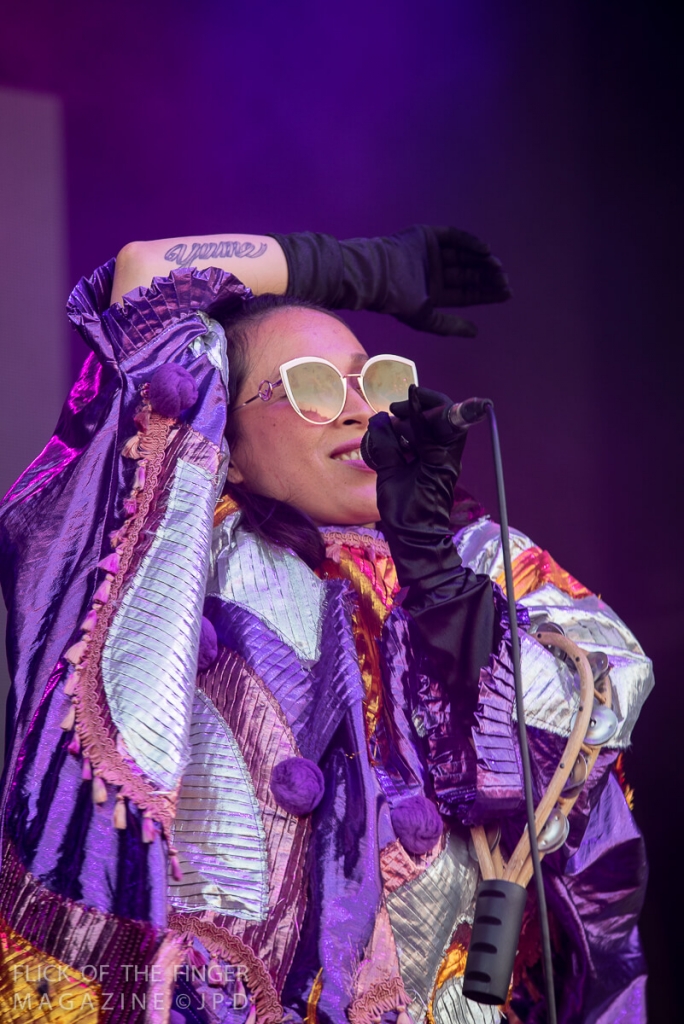 Little Dragon: Hard to believe the Gothenburg band played Manchesters, 600 capacity, Academy 2 no more than a few months ago, so it was nice to hear their sound on the big stage in front of a huge crowd of people. Not a bad step up?? Never short of bringing colour and their signature electronic vibes, many of the front rowers were singing along too, which is always encouraging. 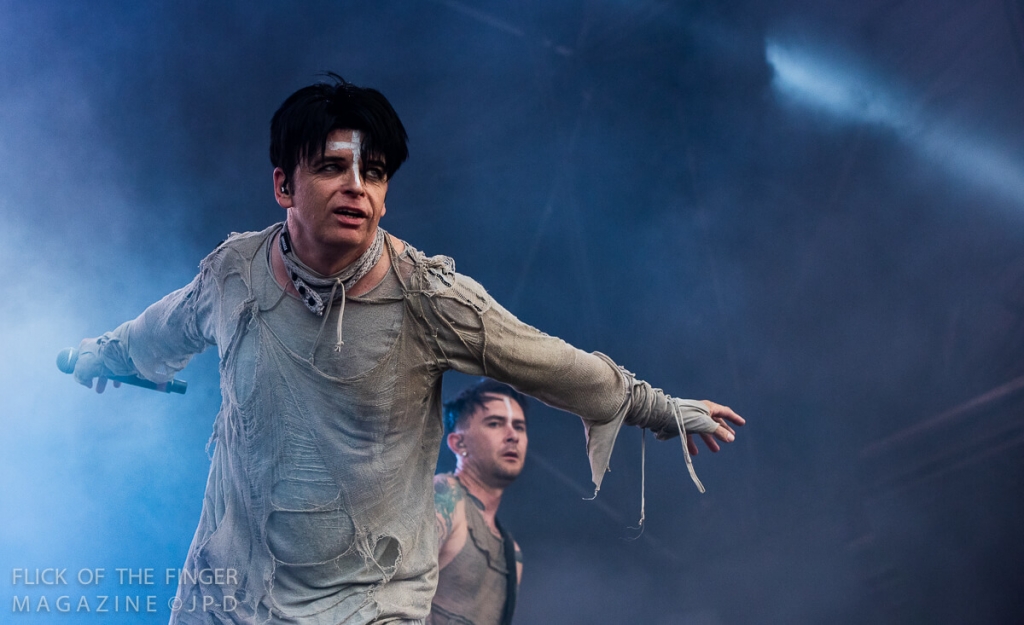 Gary Numan: Out of all the bands that played this year, Numan and his band were properly rocked out the main stage. Still sporting their ‘Savage’ tour attire, numan used every inch of the stage and still commands the attention from the crowd. Rarely showing emotion at his shows, Numan, clearly comfortable breaking his own rule whilst at the same time of breaking into a few smiles of his own.

The Chemical Brothers: OK, let’s get the elephant in the festival arena out of the way – it sucked that photographers were not aloud to take pictures outside the photography pit, even though 100’s of festival goers had with them, what could be considered as professional photography equipment. That said, decision was made (by the Chemical Brothers team, not the festival PR or Bluedot Management) and its that we must respect and adhere to. On the other hand however The Chemical Brothers came on stage and blew their own hole, in the earth’s atmosphere! Being around music production for close to a decade I can honestly say I’ve never heard crispness this loud at this level. You couldn’t just hear every single element to their tracks – you could feel it! And it was immense! So, music production and engineering – tick! Chaperoning the incredible music production that Tom and Ed create was their back catalog of household named, box of tunes! Again… Tick!

What else could a perfect end to and incredible festival need? A lighting rig that could probably be seen from space – tick and quite fitting! Not to get their music production mixed up with their overall visual delivery, The Chemical Brothers suplied nothing short of a spectacular performance. Both visually stunning and impeccably sounding.

You could quite easy go to 5 festivals at random this year and by the end of it be confused to which was which. This is where Bluedot has cornered a niche, in a fantastic location, and somehow managed to make sure that the overall vibe is consistent, family friendly and delivers ‘super-star’ DJs and producers such as The Chemical Brothers.

Could Bluedot do anything to improve? As with most festivals, things grow and develop. I’m sure a couple of large screens at the front of the main stage would be a welcomed addition or maybe one off the back of the sound desk in the main arena. Especially if DJ’s were to be the main headliners which would also help the younger / smaller fans. If 2019 was to see a 20,000+ footfall, which there is no reason why it wouldn’t, this has to be a priority. The only other note that was heard amongst attendees was the difficulty in getting in to the talks and In Conversations. These events are very popular at Bluedot and it seemed that at times, people didn’t leave the tents after talks had finished and just waited for the next talk to start. As a result, large queues were formed. Not sure how this would be tackled but it was a concern that was brought up. Nevertheless – nothing that a little bit of careful planning couldn’t fix if you plan to go in 2019, just get there first – easy!

Overall, the Bluedot team delivered a weekend that is unparalleled to anything else in the festival calendar. Being just 3 years old, the experience of the curating company, From the Fields demonstrates that they certainly know what they’re doing. Festivals like this don’t just happen by chance, its 12 months, if not longer of careful planning that leads up to 4 days of everything you see. Yes, larger headliners are seen on festival circuit however as previously mentioned, the picture is much bigger here and it’s not all about the headliners. With the amount of acts and activities that are jam packed into 4 days, Bluedot excels at delivering the simple things at the highest quality and in a totally unique concept. Well done team!

Who would FOTF like to see on the Bluedot 2019 lineup? Well The Prodigy are a little ‘Out of Space’ at times, Jamiroquai is a bit of a ‘Space Cowboy’ and ‘perhaps you didn’t realise’ Groove Armada are definitely ‘Lightsonic’. Daft Punk have also been ‘Around the World’ a few times too and they’re definitely ‘Technologic’

#See you in the fields