Skip to content
Isle of Wight Festival – The Golden Music Event of the Year!

What’s all the fuss about? Isle of Wight have announced a huge line up to claim top spot of all the festivals this year!

At the Event Production Awards held at The Novotel in London at the start of the year, Isle of Wight Festival was named the Music Event of 2017, ahead of Glastonbury, better than Reading/Leeds and significantly in front of any other competition like Latitude and Boomtown Fair. It’s no wonder as they continue to deliver stunning line ups of both legendary and contemporary artists over the weekend on the island. With no Glastonbury this year it is sure to claim the top spot once again.

The festival has a special 50th birthday to celebrate this year, and in doing so, owner and mega music promoter John Giddings has put together some of the biggest artists available to grace the stages. Then this week he casually announces another 18 acts that would fill any other festival’s full weekend, but this is IOW18, and it’s a party you need to be at!

They join headliners Depeche Mode, The Killers, Kasabian, Liam Gallagher as well as Camila Cabello, The Script, Rita Ora, Van Morrison, James Bay and Blossoms who will also be playing across the weekend. Just take a look at this line up poster! 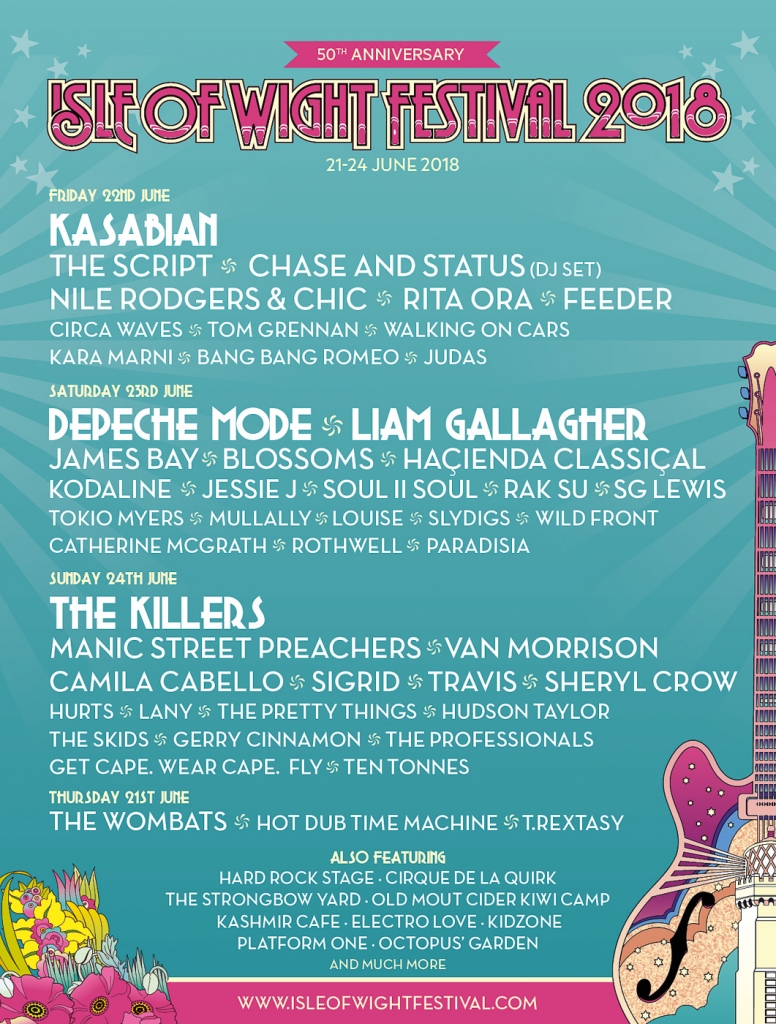 In honour of the festival’s ‘Golden Jubilee’, all attendees are invited on Saturday 23rd June to adorn themselves in gold for a weekend of fun and celebration. Expect to see sparkling divas, shining stars and victorious gladiators come together for this year’s 50th anniversary.

There is so much to see at this festival that you need a guide to know what NOT to miss. Regular attendee and Flick of the Finger Photographer/Journalist John Hayhurst will be there to capture it all for us in June, and here is his countdown top ten DO NOT MISS moments for this year!

So without looking at the headliners which we will take for granted are going to be amazing performances, what else shouldn’t you miss?

Start your festival with a bang, well there’s already 2 in their name, and they have only just been signed to Eleven Seven Label in the US, Doncaster’s Bang Bang Romeo will bring some big vocals from Anastasia Walker and great guitar-based anthemic tunes to the island. One to watch here and to see how far they go in the next couple of years when their debut album is released. Watch and Listen to ‘Chemical’ https://youtu.be/rq_sDA1EM3Q

The Pretty Things make their triumphant return to the stage, 50 years after their first performance in 1968 at the first Isle of Wight Festival. They were very Pink Floyd in their day and are set to perform their seminal rock opera album ‘S.F. Sorrow’ in full, so that will see them perform hits such as, ‘She Says Good Morning’ and ‘Walking Through My Dreams’. The band are currently on their final full tour and are determined to go out with one last explosive performance. Let’s get a little psychedelic and wear flowers in our hair on Sunday afternoon(if you have any hair left that is).

He’s lost the hat and has a whole new image and some new pumped up songs too, but expect to hear plenty from his debut, ‘Hold Back The River’ and many more. Having seen him play live many times, he is much louder and “rock” than you realise.

7 – Travis – The Brilliant Album ‘The Man Who’ in full

Their best album in full with all those hits –‘Driftwood’, ‘Why Does It Always Rain On Me’ and ‘Turn’ plus hopefully more from these Scottish Rock Stars. Having seen a headline performance by them at another festival 2 years ago, I know this will be a must see over the weekend.

So many legends at this festival and Van Morrison now in his 70’s has recently recorded two superbly different albums ‘Roll with the Punches’ and ‘Versatile’. Expect a mixture of tracks from classic Rhythm and Blues to Jazz, but also make sure you are there for ‘Gloria’ and ‘Brown Eyed Girl’.

I can’t think of anything better than having a nice cold beer, soaking up some sunshine and watching Sheryl Crow go through all her hits. Strangely lower on the bill than imaginable on the Sunday, but that means there is a Killer triple combo of Sheryl, Travis and Van the Man all on the same day, and that’s before The Killers finish us off for the weekend – Perfect!

Headlining other festivals across the UK and will have finished a sold out Arena tour by June, the Manic Street Preachers are always a big draw and an incredibly competent and hardworking band. A new album to promote, but who can resist a good bounce up and down to Motorcycle Emptiness.

I’ve just realised most of my choices are on Sunday, but I can’t leave this girl out as she is the future of young dance pop, winner of the coveted ‘BBC Sound of’ award this year, Sigrid will charm and dance her ass off for 50 minutes, expect there to be an abundance of kids down at the front to watch (similar to Zara Larrson last year). Festivals are not all about the hairy rock bands you know, and this feels like Summer wrapped up in a young Norwegian girl, if you haven’t checked her out yet watch this – https://youtu.be/cIriwVhRPVA

2 – Nile Rodgers & Chic – Freak Out and Everybody Dance

A festival favourite that will get everyone on their feet for a dance and sing-along. Be prepared to be amazed at how many songs the Hitmaker has written for other artists like Bowie, Madonna, Duran Duran, Daft Punk and with the full Chic band by his side this performance will be off the Richter scale, and those garden chairs will have to be put to the side to make way for a huge grass dancefloor. This would be a headliner at other festivals.

1 – Liam Gallagher – Flick of the Finger

Ok technically he is a headliner, but I couldn’t leave him out of the list, and seeing him on the Main Stage where he belongs, belting out all those classic 90’s tunes (and his excellent solo stuff) will be amazing. Also, this magazine is named after one of his Beady Eye songs, so what do you expect? It’s just Rock’n’Roll!

There is my top 10, but having said that I could have listed another 30 quite easily, that’s without considering the fresh new talent that will be playing the Hard Rock Stage which last year showcased a lot of the talent playing bigger stages this year.

You would be crazy not to make the Isle of Wight Festival your main choice this year, the breadth of talent is staggering, the setting is perfect, and we just need to pray for some sunshine to go with it.

Unbelievably – there are some tickets still available if you get in quick here. https://isleofwightfestival.com/info/tickets