Slam Dunk Festival have revealed the final 4 bands that will be playing this years festival.

Lower Than Atlantis, Homesafe, Say Anything and an exclusive Slam Dunk reunion of Me vs Hero are set to join the impressive line-up, joining headliners Good Charlotte and Jimmy Eat World alongside a load of other bands for a party that is not to be missed.

Mike Duce from Lower Than Atlantis says: “Slam Dunk is one of my favourite festivals in the world! The crowds are always up for a laugh and I feel like almost every band’s sets feel like a headline set. It’ll also be really nice for us to see all our mates that are in other bands. Social media content for days, a banging rock n roll show and then we make the big party!”

Say Anything are set to storm the stage as they return to Slam Dunk 2018, having not been back since their last appearance in 2012. Releasing one exemplar album after the next, Say Anything are not one to be missed.

The biggest highlight of this announcement, is the Slam Dunk exclusive reunion of Me vs Hero. Playing their debut album ‘Days That Shape Our Lives‘ in full over the three dates, this is a real treat for any festival goer.

Alongside all this, stage splits have also been announced, which you can see down below! 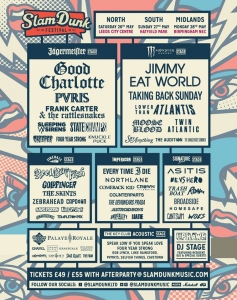 Tickets on sale now and are available from http://slamdunkmusic.com/