We are in full flow of 2020 festival season announcements and have a great one to share today. Slam Dunk have announced their first headliner and that alone has us all excited.

Don Broco have been announced as Slam Dunk Festival 2020’s first headliners. The creatively ambitious Bedford band are a fresh and exciting choice for Slam Dunk. Slam Dunk director Ben Ray explains “Don Broco headlining is pretty special for me as they are the definition of a homegrown band. They first played in 2011 on the new bands stage, and have risen through the ranks to the top of the bill.” 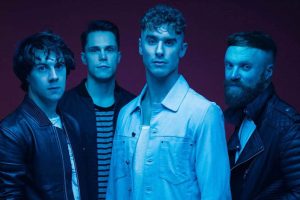 The headline reveal is not all with an exclusive UK reunion show for Motion City Soundtrack. The Minnesota rock band who took a three year break while members pursued different interests, reunited earlier this year. Joining them will be Mayday Parade the five piece Floridian band released their sixth studio album Sunnyland in 2018. The bands guitarist Alex Garcia shared “We’re extremely excited to be coming to England for Slam Dunk Festival. It’s been too long since we’ve played it and it’s definitely one of the most fun festivals to be a part of from the crowd’s energy to the after parties. Not to mention we love touring the UK!”

There is a lot of pop-punk represented in the line up already with The Wonder Years, State Champs, Knuckle Puck, Bayside and Four Year Strong also announced. The melodic side of metal-core will be stunningly represented by Ice Nine Kills. While, Atlanta’s poppy metal core four piece Issues will get everyone in the audience dancing while Hands Like Houses will bring a fresh take on alternative post hardcore.

With such a fantastic first announcement demand for tickets will be high. For the first time Slam Dunk are making available a limited number of Super Early Bird tickets (link here)which will be only sale at 2019 prices and go on sale this Friday (27 September 2020) at 10am. 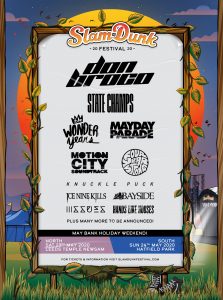