Download Festival, which takes place on 12 – 14 June 2020 at the spiritual home of rock in Donington Park, prides itself on listening to its loyal fanbase and the changes are a direct result of fan feedback.

A quick overview of the changes includes The Village being moved closer to The Arena and will be located on the hard standing tarmac lake and will be home to the largest ever festival merch superstore for weekend campers. The festival has become even more sustainable on site with 100% Hydrotreated Vegetable Oil biofuel to be used that will reduce carbon emissions by a dramatic 60%, and vegan options have increased. Alongside new locations for all campsites, walking distances have decreased, and with the new Castle Donington Bypass, there is the addition of an East Car Park. Download Festival’s legacy will also be encapsulated with a time capsule burial on site over Download weekend.

Melvin Benn, Festival Republic MD explains “Download is a festival like no other, the audience is as essential as a headliner and we’re excited to bring these site changes to the 2020 festival for better customer experience. The new location of The Village is incredibly exciting as we have made use of the hard standing tarmac lake. What’s equally exciting is the merch superstore that will be located here, with plenty of options to commemorate the weekend. The new Castle Donington Bypass has allowed us to introduce a third carpark for those coming from the North, and all these site changes have reduced walking times across the site.”

The food we eat is responsible for almost a third of our global carbon footprint. We’ve increased vegan food offerings by 40% to give over 30 vegan vendors to choose from on site and a total of over 40 vegetarian stalls to tuck into. Gluten free traders have also increased to a total of 30 stalls across the site, an increase of 42% from 2019.

Download Festival have reduced walking distances for festival attendees by moving campsites, car parks, the transport hub and The Village. When campers were looking at almost an hour walk to campsites from The Arena, the new campsite locations mean that Downloaders can reach their tents in the furthest campsites from The Arena in just 25 minutes. As The Village is now a central hub between campsites, this can be reached from the majority of campsites in 10 minutes or less. 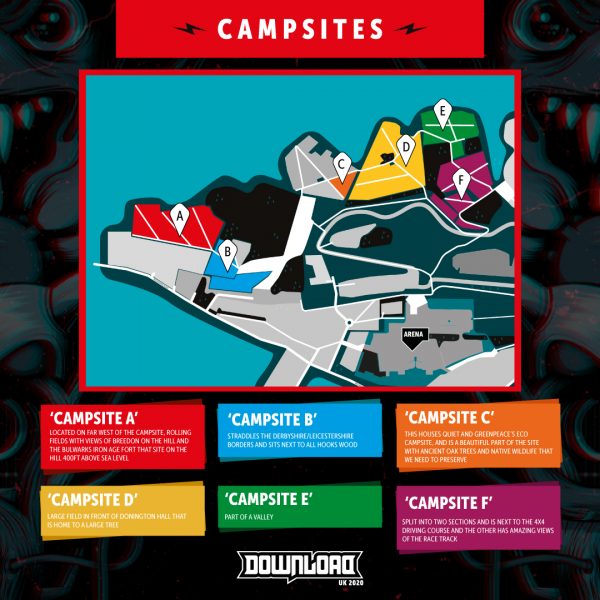 The newly located general campsites will also see a fan rebrand, and Downloaders can suggest what each of the six campsites should be called right here. Entries must be submitted by Monday 9 March, and winning names will be announced via socials on Friday 13 March. Greenpeace’s Eco Campsite also returns for its third year, with 100% of tents taken away in the previous two years.

Download Festival have reacted to public feedback, relocating The Village after the severe weather conditions of last year, to the hardstanding Tarmac Lake. Home of The Dog House, Hair Of The Dog bar, food stands, and the incredible Mind The Dog Mindfulness programming that will return in 2020, plus just minutes away from the Access Campsite, access customers can go from their camp to The Village without leaving solid ground.

The Village will also be home to a new massive 900 square meter merch superstore for the first time, and in The Arena, the serving areas of merchandise stalls have increased by 13 meters, plus additional staff on hand to aid in providing size choices whilst waiting. The lines were too long last year, and this should help speed up the process. New for 2020, the Guest Area will also have its own merch stand.

Download takes climate change seriously and as part of our Green Nation charter we are using 100% renewable Hydrotreated Vegetable Oil (HVO) biofuel to power the event this year. HVO is a form of renewable diesel that has been produced from vegetable fats and oils and offers a significant reduction in greenhouse gas emissions. In the recent The Show Must Go On report, 76% of an event on site carbon emission is power, and this act will reduce Download’s carbon emissions by 60%.

In 2019, the Liftshare carpark sold out with 157 cars taking part, with combined travel saving 16.29 tonnes of CO2e, and £20,000 was raised for local schools to install solar panels through car park donations which is up on £15,800 in 2018. The Recycling and composting rates rose from 46% in 2018 to 59% in 2019 with zero waste going to landfill, bars will once again be operating with reusable cups, and Co-op’s reverse vending machines return for a third year. All water bottles sold at the bars and traders stands will be made from renewable plant-based bottles, and all water refill points in The Arena have been completely redesigned with high flow meaning that a litre bottle can be refilled in just 3 seconds, compared to last year which could have taken up to 12 seconds. That’s four times faster! 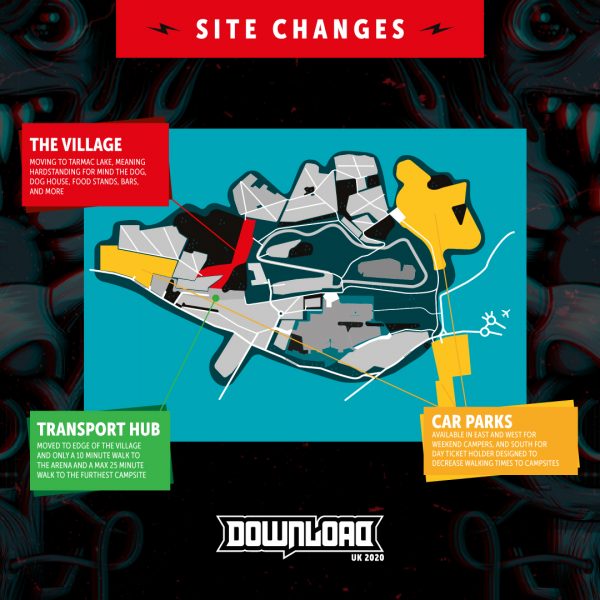 For 2020, Download Festival has introduced a new East Car Park, which alongside the West Car Park, will be dedicated to weekend campers with easy access to campsites either side of the site. The East Car Park will also be easily accessible by those travelling from the North of England via the newly created Castle Donington bypass. The South Car Park will be dedicated to day ticket holders and improved conditions within the car parks aim to better handle weather conditions. The increase in car parks also means Downloaders no longer have to walk for miles with their weekend belongings, as if parked in the East Car Park, they can reach the nearest campsite in just two minutes.

Inspired by Iron Maiden performing their Legacy of the Beast Tour, Download will be celebrating the festivals legacy with a time capsule burial on the hallowed grounds of Donington. Download will be calling on its line up of legends across the weekend to contribute to the time capsule and make their mark on the Download Festival legacy, Downloaders will also be able to suggest what can be included and have the chance to add their own bit of history. May 2078 will see the resurfacing date, marking 75 years since the very first Download Festival! As Melvin Benn shares “The legacy of Download deserves to be celebrated so we will be burying a time capsule on site during Download weekend. Artists will add to it, and I would love for Downloaders to be involved by suggesting items to include and becoming a part of history. Here’s to a great 2020.”

Inside the arena itself, The Dogtooth Stage has a reputation to host some of the best talent around, with the tent overflowing from overwhelming popularity within recent years and to reflect this, organisers will be increasing capacity from 2890 to 4050.

Festival Republic have worked with Attitude is Everything since 2001. Download Festival signed up to the Attitude is Everything Charter of Best Practice in 2017 and currently holds the Gold Award within the charter. The Accessible Campsite remains on the same hardstanding location. The Accessible Campervan space has moved to a flatter more accessible location and the space for campervans has increased by 42% to over 100 spaces for 2020.

For all your Download needs including tickets which are now on sale and FAQ’s that cover access, camping even lost property is available via the official website. 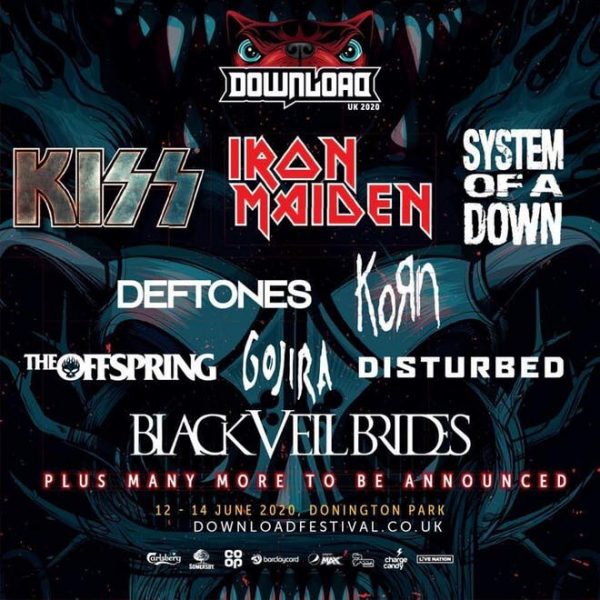