Skip to content
Festival Preview: You Are Not Alone Festival 2020

You Are Not Alone Festival is a one day Manchester city center based festival with all profits donated to mental health charity Manchester Mind, will take place on Saturday 28 March.

Bands and artists will play at a number of Manchester’s best live music venues. Based within the vibrant and eclectic Northern Quarter venues includes The Castle , 33 Oldham Street, Gulliver’s NQ, The Mint Lounge and The Rose And Monkey. 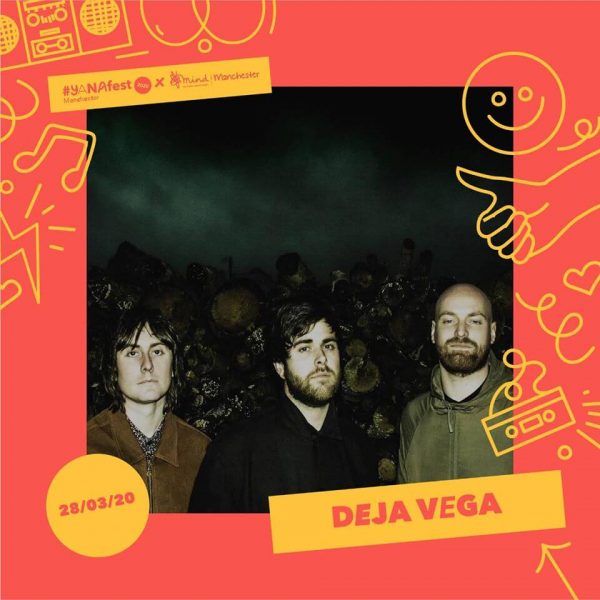 With over 50 exciting artists to choose from everyone is certainly spoiled for choice. Fancy some psych-punk, full of reverb and rhythm? Then check out Déjà Vega. Jack Fearon’s fiery vocals full of delightful rough edges is always full of intensity working beautifully with the frenzy chaos of Déjà Vega musicality. “We were really pleased to be involved with YANA fest again this year. We lost one of our closest friends to mental health, if we can raise awareness enough to just get one person to reach out for help, it’s such a worthwhile cause to support.” share Déjà Vega.

With a truckload of powerfully emotive and dynamic power rock Gathering of Strangers can be relieved on to deliver a jaw dropping set. The combination of lead singer Conor Rabone’s mature vocals and the anthemic nature of the band’s sound, is hypnotic. The poetic delights of Argh Kid comes in an energetic and explosive package of hip hop and punk with hints of ska, drum n’ bass as well as much more. With live favourites Never Drinking Again, Frank and Tearaways likely to be on the set list you’ll guaranteed that this one will get hot, sweaty and very animated.

Sharing their thoughts on playing You Are Not Alone Festival Argh Kid: “That Manchester Mind has been operating for 30 years shows how VITAL to the city the organisation is. As someone that has used the service to be able to perform at YANA to support it is the least, I can do to say thank you!” 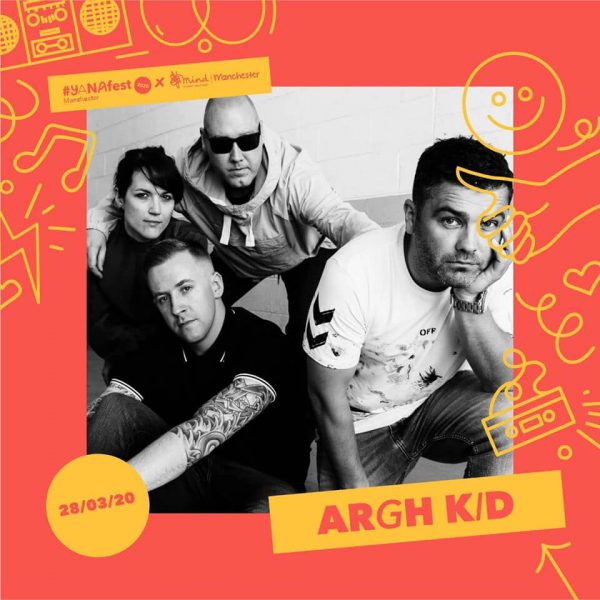 While there are many great and glorious established names on the bill, there are some truly exceptionally skilled fresh talent that we feel deserve checking out. Creating anthemic masterpieces with a melting pot of catchy lyrics and unforgettable melodies Our Fold have captured 90’s rock sound and mixed it with their own 21st Centaury spin. Hates Talking, latest project for ex Lunar singer Sam Carson, will be making their debut appearance at You Are Not Alone Festival. While the musical route Hates Talking will take is unknown, Sam Carson has previously shown a creativity for charmingly energetic indie pop merging endearing lyrics with distinctive melodies and high-spirited guitars. So, again a band, like Our Fold, that we feel confident will deliver something special.

Among the nearly 4 dozen acts appearing we have Carousel Clouds, Sauce, HAiG, The Howlers, and The Pagans S.O.H., Secluded Sea, The Howlers and Hey Bulldog. With DJ’s and four secret acts that will be announced on the day there really is a lot on offer. Did we mention tickets are just £10.00 (plus booking fee) for this splendid festival indeed you read that right – tickets are just £10.00 for the whole day and all venues.

Tickets on sale now via Skiddle and ENTS24. For further announcements, news and details about You Are Not Alone Festival can be found on their Facebook page and Twitter from where they tweet as @YANAfest.