A Festival Worthy Of The Two Year Wait!

Saturday was day two of this year’s weekender, and it was a fantastic day all round!

It was a lively start over on the main stage, as the K’s kicked off the day. Normally the first band on at a festival don’t draw a huge crowd, but this time round was something different, the festival site had already filled up nicely, and the crowd for The K’s was more than ready for a gig, as flying pints and a sea of flares made a very early appearance. For some people, this was their second day at the festival, but for most, it was their first day in there, and maybe even their first festival back since 2019, and you could tell, because it was the liveliest crowd I’ve seen so early on in a day at any festival.

Heading over to the Big Top Stage, Zuzu was performing for the second slot of the day for that stage. Donning those signature, big circle glasses and delivering a set full of swagger, attitude and energy, as the crowd lapped it up. It’s great to see a band who are just starting to breakthrough get support at a festival, and it’s even better when it’s early on in the day. It means people have made an effort to check out the up and coming bands, and show them support they need to be able to do what they love doing. The festival being in Warrington will probably have helped to gather an early crowd for her set, as she is from Merseyside, so there’s no doubt that fans will have made that short journey up the motorway to support her.

For us, The Sherlocks came next back over on the main stage, and it’s not usually until much later in the day that you are weaving in and out of big crowds to get from one stage to the other, but it pays excellent homage to how good this festival is, and how good the lineup was for the Saturday, that the punters had got down to the festival so early in the day. Had this been the early 1970’s, The Sherlocks, who are from Yorkshire, would have been crossing behind the enemy lines of Lancashire, thankfully, Warrington is now part of Cheshire, and there was definitely no love lost between the fans and the band. It’s always good to see The Sherlocks performing, as they’ve gathered quite the following in the years they’ve been around, and they always deliver the perfect set to get crowds nicely warmed up.

A few technical hitches saw a slight delay to the start of Self Esteem’s set, however they held the crowd with jokes and interaction, before bursting into a fantastic set. It’s not often that you see choreographed dance moves these days, or on stage dancing at all, but watching Self Esteem is a bit of a breath of fresh air. Accompanied by two backing dancers, it’s quite mesmerising to watch the fluid movements on stage, and like I said, it’s become a bit of a rarity these days, especially for up and coming bands. Kudos to Self Esteem for standing out from the crowd, and delivering a fantastically energetic set, complete with stunning vocal delivery.

As afternoon turned to early evening, the big guns started to come out. Jake Bugg delivered a really good set of old and new material, and it’s good to see him still managing to draw a crowd after so many years of doing what he does. Over on the Viola Beach stage, The Hara were also gathering a very healthy crowd. I first caught this band at another festival, and had to catch them again this time round, and I am glad I did. If this band don’t end up going places very quickly, then I’d be very, very surprised. the energy of frontman Josh is something that many would love to have. They’ve honed their sound to perfection, and they deliver a flawless set each time you see them. It’s not all that often you see bands on the smaller stages getting in with the crowd, but there’s no stopping Josh. If he wants to be in with the crowd, then he gets stuck in.

Next up were two titans of indie music. Shed Seven performed on the main stage, with the glowing sunset creating a fantastic backdrop for the band, and their set was glowing too, with anthem after anthem all going down an absolute treat with the crowd. The crowd lapped up every song, and it’s hard not to love a set from Shed Seven, because although you might think you don’t know much of their music, you end up knowing most, if not all of the songs. The other titan is more of a heavyweight. A heavyweight champion of the world to be a bit more precise. That is of course, Reverend and The Makers, who were determined for every single onlooker to be bouncing away with them as they performed their first set in a couple of years. It may have been dark by the time their set finished, but it was clear as day that the band and crowd loved every minute of that set, and personally, it was great to see them back. 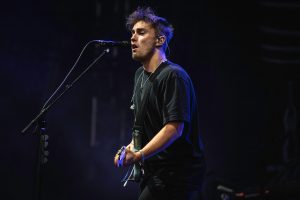 In between Shed Seven and Reverend, was Sam Fender. Now he’s been scheduled to play this festival every year, but had to pull out each time for various reasons, but this time round, he made it to the stage, and delivered one of the best sets of the day. He’s one of my favourite artists around at the moment, and is surely going to be headlining festivals within the next couple of years. He has an honesty about his music that very few others would dare to have, his lyrics are the most relatable lyrics in years, and you can tell it’s a dream come true for him. He enjoys every minute of performing, and that enjoyment spills out into the crowd. Part way through his set, a member of the audience required medical attention, and Sam noticed this whilst on stage, brought his set to a stop, got the crowd to give the medics a round of applause and showed how down to earth he really is. Huge kudos to the medics, and to Sam Fender for dealing with the situation the way they did, and we hope whoever was involved is okay.

Headlining the festival was James. If you need any inspiration of how to stay relevant in the industry, all you have to do is look at James, and how timeless their performance is. Tim Booth is one of the most fascinating frontmen you’ll ever watch, he moves on stage in motions that are difficult to explain, and even harder to capture. One thing that shows just how good they are, is that everyone from right up against the barrier, to the people at the back of the crowd was signing along to the tracks they performed. It’s not often this happens, or not often with the energy it was happening with as James closed out the main stage.

Closing the Big Top Stage for Saturday was Easy Life. The crowd were nicely warmed up from Reverend and The Makers set, and the music in between the changeover kept the energy in the tent to an absolute maximum. Following on from Reverend can’t be easy, but for Easy Life, well, it’s in their name. They delivered their unique sound to a packed out Big Top stage, and it was mesmerising to watch them wrap the crowd around their fingers.

It was so good to be back in amongst the crowds of Neighbourhood Weekender, and we can’t wait to do it all over again for Sunday!