Opening the main stage for Saturday were the brilliant ‘Before Breakfast’, and they were a nice chilled out start as festival goers began to pile into Hillsborough Park for another excellent day of live music and being back with thousands of other people who love to be in the moment of watching a band do what they do best. Kicking off at a similar time over on the Library stage, August Charles delivered a brilliant set of a style of music you don’t hear all that often, that is quite challenging to pin down to one genre. They had a sort of Frank Zappa vibe, with hints of hip hop.

Next up on the main stage, were Everly Pregnant Brothers. It was amazing to see such a vast crowd form for these, especially considering they were only the second band to take to the main stage! If you have never caught these at one of their many festival appearances, then they deliver a sort of comedy music set, with amusing remoulds of some famous tracks, such as ‘No Oven, No Pie’, ‘Suck In The Lidl With You’ and ‘Personal Cheeses’. It’s a light hearted bit of fun and always a nice way to get a crowd in the mood. Lauren Hibberd followed their set, dressed as a pink princess, with her signature sign decorating the stage, which read, ‘Who The Fuck Is Lauren Hibberd’. A question I had actually asked myself that day, having never seen her perform before. I was pleasantly surprised by her set, and the fans seemed to love her too!

Over in The Leadmill Stage at 3pm, Weedipus took to the stage. They didn’t draw a huge crowd at the start of the set, but after a few tracks, the tent filled up nicely, and the atmosphere was brilliant. It was the first slightly heavier band that I had come across on the Saturday, and a set that put the band onto my radar for future events and further listening. The thing about The Leadmill Stage is that it is in collaboration with BBC Introducing, and as I’m sure you’ll know, the people who picks bands for BBC Introducing always do a great job. 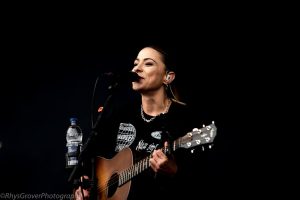 Next up was a fantastic set from Lucy Spraggan, who was in a way returning home, having been raised in Sheffield. You could tell what it meant to her to be back on stage, doing what she has always loved doing, and it’s nice to see her still getting an incredible reception after a pandemic. During the pandemic, her latest album managed to go straight in at number 5 on the UK Albums Charts. Throughout her set, she played a mix of old and new material, stating that she had stopped playing the older stuff, but having not played in a while, she was going to just play whatever she felt like. A plan that worked excellently, as the crowd lapped up every note she sang.

Things started to get a bit more indie as the day went on from this point, with The Lathums and The Sherlocks both performing fantastic sets to an eager crowd, in warm up for Blossoms. Throughout those three bands, the crowd were going crazy, with multiple flares being set off, flags being waved, mosh pits and flying pints. It’s really good to see this kind of atmosphere back at festivals, and it’s great to see fans and bands alike blowing out some of the spent up energy after being kept from gigs for the last 16 or so months. Another pleasing aspect is that the fans loved The Lathums and The Sherlocks as much as they loved the indie giant that is Blossoms, and although Blossoms drew one of the biggest crowds of the day, I’d happily say that The Sherlocks had a much more up-for-it set of fans watching them. 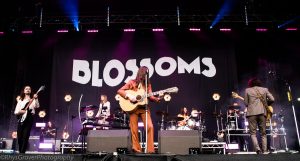 In between The Sherlocks and Blossoms, I managed to get quick snippets of the sets from Bloxx and Little Sim, who took the stage at The Leadmill Stage and T’Other Stage respectively. Bloxx are now defiantly ones to watch for me, and another of the bands performing in that tent that were given the opportunity by BBC Introducing. The entire band were raring to go from the off, and it was like they had never been away. Everything they did on stage, both musically and physically was near perfect. As for Little Simz, the tent was overflowing with people who wanted to get a glimpse of her set. She first popped up on my radar from her collaboration with Serge Pizzorno (Kasabian) on his debut solo album a couple of years back, and whilst the genre of music she performs isn’t anything too similar to that track she did with Serge, she still manages to appeal to me. She has a fanatic persona on stage and really knows how to control a crowd, so what more could you ask for.

I had a bit of spare time after watching Blossoms, so had a wander around the site, soaking up the glorious atmosphere that was bubbling around the festival. In doing this, I managed to catch a bit of Vistas set over on the Library stage. These guys must be doing something right, because despite being at a bit of clash with Blossoms in terms of timings, they still drew a healthy crowd. Their soft indie tracks are always going to go down well at a festival such as Tramlines, and that was proved throughout their set. I didn’t get to stay too long, as I had to dash back to Sarah Nulty’s Main Stage for the headliners, Royal Blood. 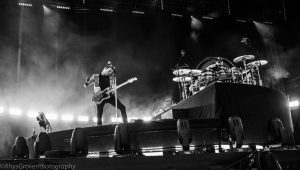 Royal Blood have been around for a decade now, with their debut album being released in 2014, and their latest being released earlier this year to extremely good reviews. It’s crystal clear why the heavy rock duo are still as popular as ever. They may have developed their sound and incorporated more pop influences into their latest album, but they still deliver a blistering set of thumping bass, pounding drums and an incredible on stage act. They were nicely warmed up to, having played a couple of intimate shows in the week leading up to this performance. One thing that is always a certainty with watching Royal Blood perform, is that drummer Ben Thatcher will have his thick black shades and one of his collection of hats on whilst he beats the living shit out of his drums. They powered through their set, this time backed by an extra body on keys and two backing vocalists, but that’s to be expected with the depth of music in their latest album. They offered up songs from their debut which will always please the crowd, songs from their latest album such as ‘Boilermaker’ (for which he switches his bass for a triple-humbucker strat, like it’s some kind of alternative universe) and a few from their second album. It was probably the most lively set of the weekend so far, and if not, then a very close second to The Streets’ performance the previous night.