A Genre Spanning Day Of Entertainment!

The perfect way to end what was a fantastic weekend getting back into live music!

Tramlines 2021 has come to an end, and Sunday’s performances were the most suited performances possible to close out what has been an incredible weekend. Even the sun came out for the whole of Sunday, creating a fantastic atmosphere!

Starting proceedings for the final day was Phoebe Green, who delivered a fantastic set as the crowds began to pile into Hillsborough Park for one last time at around midday. The band only had half an hour to perform, but they delivered a great set, and the fans lapped it up. Those who were more into heavy rock/metal had the opportunity to possibly discover a new band over in The Leadmill Stage, in the form of Havelocke. These are an upcoming Post-Hardcore, Horror-punk band who are rising through the scene in Sheffield. Not usually my bag, but I checked them out and I was pleasantly surprised by the quality of the set they delivered. They had a great energy about them, which is expected of the genre they are performing, and their music has some serious quality to it. For me, definitely ones I’ll try and catch in the future.

Next up on Sarah Nulty’s Main Stage was 45 minutes of old school Indie anthems, delivered by none other than The Fratellis. Donning his signature trilby hat and a stunning white telecaster, Jon Fratelli and co delivered anthem after anthem, with the crowd going crazy from the minute they kicked off to the closing notes of Chelsea Dagger at the end of their set. It was a half hour wait til the next band I wanted to catch came on at the Main Stage, so I took the opportunity to soak up the festival atmosphere, and travel around the site, seeing what was happening. Although I didn’t manage to catch any of the comedy acts on Sunday, the tent looked busy from the get go, and from what I heard amongst other festival goers, Milton Jones delivered his usual brilliant set of one liners. The half hour quickly passed and it was back to main stage for SPINN, who had taken the place of Porridge Radio at the last minute. 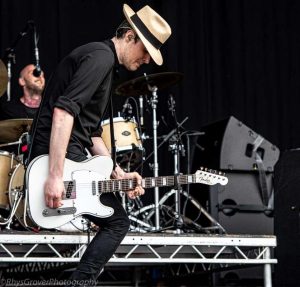 If you haven’t seen SPINN before, then they are definitely worth checking out if you are into summery indie music. They were perfect for a day like Sunday, and came on just as the sun was really beating down onto Hillsborough Park. Frontman Johnny Quinn is fun to watch as he dances around his mic, and he delivers a great vocal performance throughout his set. With us only getting the first three songs to shoot bands, there was a bit more spare time, so I took a walk over to the Library stage, (stopping off for some Chinese food on the way, chicken in black bean sauce if you’re interested) and caught as much of KIN’s set as I could.

The female fronted three piece delivered quite a calming set to the fans that had walked up to the stage to see them, although with them clashing with the upcoming Reytons set, I think a lot of the fans they appealed to would have been getting themselves the best spot for The Reytons. I myself only caught the first couple of songs, before having to dash to catch both Holly Humberstone and The Reytons (who were on different sides of the festival at the same time sadly, but festivals always have a few clashes), but I liked what I saw, and next time I come across KIN, I will definitely try and catch much more of their set.

I quickly got over to the T’Other Stage to catch the opening song from Holly Humberstone, but as I’ve said, next up was The Reytons, and I knew that their early Arctic Monkey style indie was going to go down like a house on fire at this festival, so I made sure I was there to grab some crowd shots, and shots of the band doing what they love best. 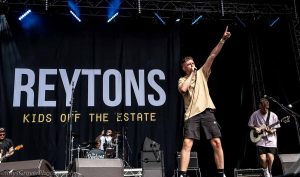 If you haven’t heard of The Reytons, then get listening, and sooner rather than later, because it’s quite clear from their performance on Sunday that they are going on to bigger and better things. The support the fans showed them was probably the best I have seen all weekend, and the set they delivered was everything you would expect it to be. Raucous, energetic, and from the fans perspective, it seemed to be only a riot van short of being an actual riot. Flares were going off left right and centre, bottles, pints and t shirts were being thrown left right and centre and every single fan who watched them, loved every single minute of their set. The energy of the band was second to none and it helped to gee up the atmosphere even more. A solid 9/10 performance.

It was a real change of pace at the Main Stage after the Reytons, with Tom Walker taking to the stage straight after them, who delivers a chilled out acoustic set. Don’t get me wrong, there’s definitely energy in his performances, especially in tracks such as ‘Leave A Light On’, but it was no match for the energy level that was set by The Reytons. It was more catered for fans who had chosen Holly Humberstone over Reytons, and a vast crowd gathered to watch Tom Walker and his band deliver a fantastic set of older and new material. Next up was another clash, this time between Chubby and The Gang, who had a similar vibe to the earlier mentioned Havelocke, and Baby Queen. I did manage to catch bits of both sets, and both delivered fantastic material. Baby Queen is exactly what has been missing from the scene for a while, she’s punk, she’s pop, she’s everything in between.

All that was left for me then was Dizzee Rascal and Supergrass. However I think for the majority of people, Dizzee Rascal was treated as a headliner, as he drew a much bigger crowd, but I do feel Suprgrass would have gathered an equal crowd having not been on at the same time as Everything Everything, with both bands appealing to a very similar crowd and demographic. Dizzee Rascal delivered a bonkers set (*insert comedy drum fill here*) and once again the last raining flares and flying objects made an appearance. Supergrass delivered their classics and much loved tracks, such as ‘Alright’, ‘Richard III’ and the ever popular ‘Pumping On Your Stereo’ closed their set, and the festival.

Tickets for next years Tramlines go on sale at 6pm, 26th July 2021! We cannot wait to be back in Sheffield for Tramlines 2022!