Neighbourhood Weekender Wraps Up For Another Year

After an incredible first day, there was big shoes to fill for every band that took to one of the trio of stages for day two of Neighbourhood Weekender, and it was down to Foxglove to start the proceedings off on the main stage, with The Rills opening up The Big Tent not too long after. It was slightly later in the day when things were kicked off at the Viola Beach stage, and Abbie Ozard delivered a brilliant set to open such an iconic stage at this festival, set in the hometown of the namesake for the stage.

Second on the main stage for the day was The Bootleg Beatles, not a band you’d necessarily expect at a festival like this, but a band that went down incredibly well with the healthy crowd which had already began to gather within the proximity of the main stage. Cast, Inhaler and Pale Waves followed on from the Beatles tribute set, and each of the three delivered a memorable set each, delivering a mix of their big hits and some of their newer material. Whilst all this was taking place on the Main Stage, there was plenty of action over at The Big Top, which hosted the likes of Starsailor, Razorlight and Manic Street Preachers for the closing sets of the night, and earlier in the day hosted some great up and coming acts, such as Baby Queen, Jamie Webster and The Rifles.

There was an incredible host of fresh talent being given the opportunity to deliver their music to the growing crowds over at The Viola Beach stage, and every time I passed the stage, it was extremely pleasing to see healthy crowds gathered for every performance throughout the day. In previous years, I have discovered some firm favourite bands on this stage, and it was no different this year either. The likes of Louis Dunford, Pixey and Daisy Brain are all now firmly on my radar, and it was great to be able to see Retro Video Club finally perform having heard numerous good reports of their fantastic live performances. 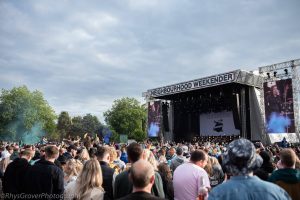 The day flies by when you’re at a festival, especially one with so much to keep you occupied, and it was soon time for the headlining acts to take to the stage. Tom Grennan kicked off the three closing acts for the main stage, and the crowd were in full swing, with the crowd becoming a sea of shoulder surfing music lovers. From the front to the back of the crowd which had gathered, everyone was singing and joining in with the fantastic atmosphere which had been building throughout the day. Spirits were elevated even more when Blossoms took to the stage, bringing their latest album, ‘Ribbon Around The Bomb’ to their fans.

The opening portion of their set was a great mix of material from their two latest albums, and the crowd were bouncing from front to back, flares going off left, right and centre throughout the performance, and the support that was shown to the band was quite pleasing to see. It was the first time for the weekend I had seen flags and banners flying above the crowd, with messages of adoration scribbled across them, including a St George’s Cross emblazoned with the word ‘STOCKPORT’.

Now, for the headline act. Kasabian have always been known for putting on an incredible show, and even despite their recent departure with frontman Tom, Serge Pizzorno has stepped up to the plate and become one of the best frontmen currently performing. Serge has always been a member that fans have adored, and they show their incredible affection throughout the set. The setlist opens up with a run of some of their biggest and most loved hits, getting the already rowdy crowd raising the spirits and energy. What was pleasing to see was that the fantastic crowd were looking out for one another, and if someone went down in one of the many pits which were forming throughout the crowd, they were being helped up, as should always be the way. 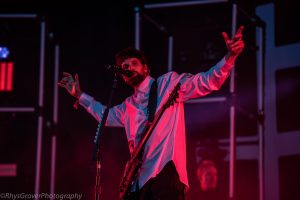 Kasabian performed a similar setlist to that which they performed in their UK tour last Winter, with a couple of songs switched out to make way for their new material. It’s a time of change for Kasabian as they work everything out with the new band format, and it was good to see their loyal fans were getting behind them and showing their support.

Neighbourhood Weekender is always a fantastic festival, and one of the first of the festival season, and all in all, you could not ask for a better way to start a summer of live music. The festival isn’t too big it’s hard to ease back into, it’s the perfect size. Three stages of some of the best live music around, combined with some of the best food and drink stalls you can find at any festival, makes for one truly great weekend.