Saturday Saw Courteeners Return For Their Second Headline At The Festival

As always, Neighbourhood Weekender showcased the best of upcoming talent and a host of established bands

Split across three stages, and set in Warrington’s Victoria Park, Neighbourhood Weekender returned for another year of incredible music, food and feel good times. You might be thinking it’s not been all that long since the last time Weekender took residence in Victoria Park, and you’d be right, as last year the festival was pushed to September due to COVID restrictions, tis year however, it was back to normal, and it marks the start of what is set to be an incredible summer of live music up and down the UK.

The gates to Neighbourhood Weekender 2022 swung open, and straight away it was all guns blazing for live music. Pip Blom and CRAWLERS were the first acts of this years festival, taking their places on the Main Stage and The Big Top respectively. Any festival where your opening two bands are as talented as these two says a lot about what the rest of the day, and weekend, is going to be like. This festival really is the perfect place for music lovers to discover their next favourite band, and having the two smaller stages means there is twice as much of a chance that someone will discover their new favourite whilst attending this epic event.

The day continued with a steady stream of incredible music, with the likes of current sensation Wet Leg taking an early slot in The Big Top, along with Dylan John Thomas and The Reytons, whilst over at The Viola Beach stage, the likes of Rats, Brooke Combe and Michael Aldag were given the opportunity to perform to the eager crowds. This festival is never without its fair share of established artists, and Scouting For Girls went down perfectly, thrown in the middle of the performances over in The Big Top, and a sizeable crowd gathered to witness their set, most of whom had come from watching The Fratellis take to the main stage and roll back the years. 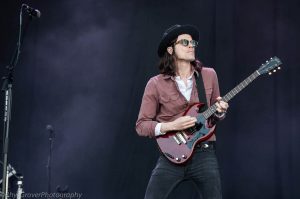 Whilst Scouting For Girls were ripping up the Big Top stage, The Lathums took to the main stage, having recently released their incredible debut album, this was always going to be a special performance for the band who are from just round the corner in Wigan. Whilst their set clashed, this didn’t mean their crowd size suffered, and a healthy crowd gathered to watch one of the finest up and coming bands around at this moment do their thing on the Main Stage. After their set, it was starting to get to the headline end of the first day, and the main stage had 3 incredible acts lined up to close out the festival.

James Bay followed The Lathums, and his set was sprinkled with incredible sing along hits, mostly from his stunning album ‘The Chaos and The Calm’. By this time in the day, plenty of drink had been flowing, and the crowd were eager to get behind each and every band and artist who took any of the three stages. Crowds were getting lively, flares started to be lit and the atmosphere was really hotting up. The Reytons were on in The Big Top  just before James Bay and they really kicked the crowd into full gear, and that’s the way things stayed there for the remainder of the day, with The Snuts delivering a set which kept energy incredibly high in the tent.

DMA’s were the last to perform before Courteeners took their headlining slot for the second time in the fesitval’s history. Pulling out all the stops, having not made an appearance on UK shores for a number of years due to the pandemic, DMA’s delivered something quite mesmerising to watch. A selection of their bigger hits, such as ‘The Glow’, ‘Lay Down’ and ‘In The Air’ were well placed within the setlist, which was also made up of some of their lesser known material, yet this didn’t stop the crowd from getting behind the band, and showing incredible support. 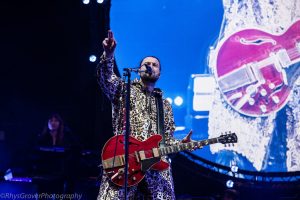 Now was the moment everyone had been waiting for. A band known for their incredible festival performances, and frequently drawing big crowds to their own headline gigs in venues such as Heaton Park and Lancashire Cricket Ground. Liam Fray swaggered around the stage in full control throughout the performance, with the crowd wrapped around his finger, hanging off his every word. Courteeners have always had a devoted fan base, and their performances are known to be lively. This time round, there were less flying pints of various liquids, and instead a sea of flares for the band’s biggest tracks. The band are adored across the UK, but there’s something truly remarkable about watching these guys do their thing at gigs so close to Manchester.

Neighbourhood Weekender continues for its second and final day of 2022 tomorrow (29th May), and it’s shaped up to be another incredible day of performances, with Kasabian and Blossoms taking headline slots.