Tramlines Festival Is Back For Another Incredible Year

The rain held off for the day, and the crowds had gathered for another day of fantastic live music

Split across three ‘main’ stages, Tramlines Festival never fails to have an incredible line-up across the entire weekend, and Saturday always seems to be the day where it’s all stations go. The crowd are already revved up from the previous night, there’s usually more acts on than the other two days, and the crowds always gather earlier into the day. This was apparent from the get go as a healthy crowd had gathered to watch Pixey open Sarah Nulty’s Main Stage.

It was great to see such a gathering for Pixey, as this was her first ever main stage performance at a festival, and the name she has made for herself over the past year or so is remarkable. I watched as much of Pixey as I could, as I’ve been a fan since seeing her earlier this year, but I had to dash over to The Leadmill Stage for October Drift. These guys have been on the radar for a while, and I’ve seen them before, so I knew what to expect. Or so I thought.

Their usual drummer was absent due to the expected birth of his child, so the band were playing with a session drummer, which took a bit of their edge off. A band that are usually in your face and with a fiery attitude had toned it down to something a bit softer. It wasn’t acoustic but it wasn’t far off. This isn’t a bad thing, as it shows October Drift have an incredible talent to be able to switch their set up no matter what. It was quite nice to see a different side to them actually.

At festivals like this, you do tend to spend a lot of your time jumping between two stages, and getting down to the other areas of the festival can prove difficult. Early in the day, T’Other stage has some of the finest upcoming comedians on to warm up the crowd, so any gaps in my early schedule were spent down there, soaking up the atmosphere and having a break from the cameras for a few minutes. I spent some time there before heading back over to the main stage for Everly Pregnant Brothers’ set. It really wouldn’t be a festival in Sheffield without these guys performing, and before they even started, the message they were going for was easy to see. A banner was draped behind them, displaying the message ‘Fuck Worcester Sauce and Fuck The Tories’, and their set followed a similar attitude. If you haven’t seen these guys, then they are always worth a watch, they’re a comical band, using famous tracks but twisting the words for comedic effect.

Some of the bigger bands, and some of the best upcoming talent were starting to come into the lineup now. It kicked off with Swim School, a band I’d not heard of, but one I will definitely be keeping a very close eye on. They come across as your average indie band when you first see them, but as they charge into their set, they become something all of their own. They hail from Scotland, and the front woman is lit up throughout the set, with her piercing eyes glaring into the crowd as she sings. Her movements are limited, but she controls the crowd 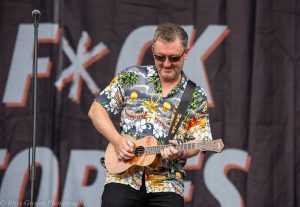 The Lottery Winners followed on, and they were as lively as always. Thom Rylance is one of the most charismatic frontmen around at the moment, and his on stage attitude is incredible to watch. He jokes with the crowd, impersonating Freddie Mercury and taking the piss out of his band mates in a jovial manner that always wins the crowd over. I got to soak up a bit more of their set than I usually would, and it was lovely to see. Their successors were one of my main focuses for the day though.

Inhaler are a band I’ve waited to capture for the last couple of years, missing them due to clashes at other festivals and not managing to get down to their headline gigs. I can now say I’ve shot them, and I’ve seen them do their thing, and I really hope it’s not all that long before I get to see them again. You can hear the U2 influence, but they are a band of their own right. They already have an adoring fan base, which is growing daily, and I can’t see it being too long before they are on much closer to the headlining slot. 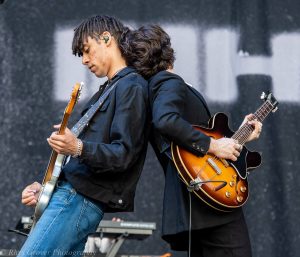 I headed back over to The Leadmill stage and soaked up the rest of their set waiting for Crawlers to take to the stage in their tent. A band that have one of the best on stage presences like very few others. They dive around the dimly lit stage, their energy spilling out into the crowd, and the atmosphere builds throughout the set into an incredible crescendo. I finally got down to T’Other stage at this point as I chose to cover Sam Ryder over Little Man Tate, and it appeared like a lot of punters had done the same. The tent was overflowing, spilling right back to the Library stage. His recent success is a tale that will be told for years to come. Starting out in TikTok, to end up finishing second in this years Eurovision. It’s a story like no other, and I’m glad to have got to see him perform whilst he basks in the glory of his recent endeavours.

I was down to the final few bands now, Just Mustard, The Vaccines and Kasabian. What an incredible way to wrap up the day. Just Mustard tore the roof off of The Leadmill Stage, and it appears their recent tour with Fontaines DC has paid off big time, as the tent was packed out for the whole of their set. The Vaccines clashed with Self Esteem, so it was a hard choice for me, but the crowd that had gathered in the Main Stage arena said everything I needed to know about where I needed to be.

The Vaccines have an incredible back catalogue, packed with indie anthems and crowd pleasing choruses. They’ve been doing their thing for a number of years now, and their fame and success doesn’t seem to be showing any signs of slowing down. Their recent album was an overall success, and the tracks from that album which they included in their set went down like they were old favourites.

Now it was time for the main event. The reason I imagine a lot of people had grabbed tickets. Kasabian have changed things up, a lot of people still yet to see this new incarnation of the band, and from the first pounding notes fo their set, the crowd were going mental. Toilet rolls, empty cans, pint cans, inflatables and god knows what else were flying through the air, the odd stray one coming through to the photo pit. Serge bounces off the energy created by the crowd, whether he’s at a festival or it’s their own headline gig. He bounced across the stage, pumping up the crowd, basking in the glory of the songs which have been his baby since the early 2000’s. The direction which this band are heading may seem questionable, and losing Tom was a big thing for this band, but they have taken it in their stride and are loving every minute.