Skip to content
Alan Merrill Returns For A UK Tour

Alan Merrill, founder of 1970s pop legends The Arrows and the first ever foreign pop star in Japan, returns to the UK from New York

The Arrows formed in 1974 and had their first UK hit on Mickie Most’s RAK label later that same year with Touch Too Much. 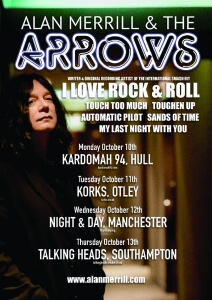 The band were then signed by ITV for their own series, The Arrows Show, which ran throughout 1976 and 1977 featuring legendary live guests such as David Bowie, Marc Bolan, Suzi Quatro, Slade, The Sweet and Mud. Running alongside this, The Arrows Cartoon Strip also featured on ITV for over a year

During this time Alan Merrill also wrote the classic I Love Rock & Roll, later to become a huge worldwide hit for Joan Jett & The Blackhearts, initially recorded by Joan with The Sex Pistols and later covered by many other artists

In 1985 Alan signed to Polydor Records as a solo recording artist, before joining Meatloaf as bassist in 1986, a union that lasted for over four years. Since the turn of the Millennium, Alan has released a further 15 albums and retains a legendary status throughout the USA, the UK and Japan.

His current live band, which features bassist Dave Glover [formerly a member of Slade and The Sweet] play a full selection of The Arrows hits with all the glamour and enthusiasm of the Glam Rock days of the 1970s.