The Faim have announced their State Of Mind World tour. Continuing on from their hugely successful & sold out headline tour of UK & Europe earlier this year, the band will hit a further 23 cities across Australia, UK & Europe. Adding to an already massive 150 shows in the past 13 months.

Since their launch last February, The Faim have been a band on the rise, to say the least. They unveiled their critically acclaimed debut EP, Summer Is a Curse, toured exhaustively worldwide, supporting the likes of PVRIS, Hands Like Houses, Sleeping With Sirens and Against the Current as well as playing European festival staples including Reading & Leeds, Slam Dunk and Download Festival all whilst playing over 150 shows in just the past 13 months.

“TIME HAS COME TO OPEN OUR STATE OF MIND” says singer Josh Raven “It’s hard to believe that 4 guys from Perth are even announcing these shows for our headline tour. We’re bringing our craziness to new cities with new songs and playing more incredible festivals like Lollapalooza, Reading & Leeds and Frequency Festival. This is beyond humbling and it’s all possible because of the incredible relationships we’ve created with you. We’re beyond excited to see all your wonderful faces. Endless love.”

The Faim also recently wrapped their first ever headline tour of Australia and Europe, playing 31 shows across 13 countries. The quartet is currently on twenty-eight date US Tour supporting Andy Black and gearing up for a busy summer playing Lollapalooza in Berlin plus coveted slots at Reading & Leeds Festival for the 2nd year in a row.

The Faim: State of Mind Tour UK dates are as follows:

Tickets on sale this Friday 17 May 2019 from the usual retailers including via Bands In Town. 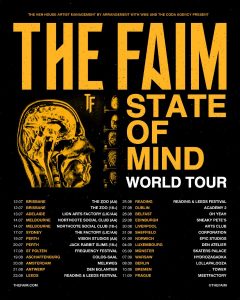