Thrice, are certainly regarded as one of the most innovative rock bands of their generation and Refused an incredibly influential and creative punk rock band. They are touring together, and we could not be happier.

Thrice released their latest album Palms via Epitaph Records in 2018. While Freedom was released by Refused in 2015. So we expect a nice mix of back catalogue and new tracks on the tour.

Tickets go on sale this Friday via many of the usual ticket retailers including via the Thrice official website. 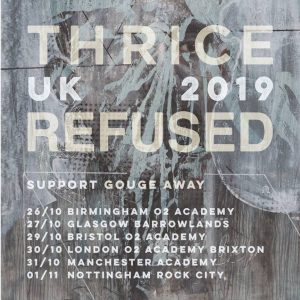