Skip to content
Slade Come To Manchester In December

A Slade Gig Just Days Before Christmas. What More Could You Want!

Slade will bring their epic rock hits to the O2 Ritz on 19th December.

SLADE’S chart career has spanned 6 decades and their enduring songs “Far Far Away”, “Cum On Feel The Noize” and “Coz I Luv You” are still featured today in TV commercials for some of the Worlds biggest companies. They are without doubt one of the most exciting bands to come out of Great Britain in the past 50 years. With their unique blend of perfect pop rock’n’roll, outrageous flamboyance and pure fun, and no less than 23 top-20 singles of which 6 were No-1 smash hits…plus 6 smash albums, Slade have become a firm favourite in the hearts of pop fans all over the world.

SLADE have continued to tour the world. They are firm favourites on the lucrative German festival scene and undertake an annual UK “Merry Christmas Everybody” tour in December. They have a huge following of fans and regularly play concert dates in Germany, Poland, Belgium, Holland, Sweden, Denmark, Norway, Finland, Czech Republic, Estonia, Latvia, Lithuania, Ukraine, Bulgaria, Spain & France. Having just returned from a festival in Gibraltar, next stop is Greenland and Faroe Islands. 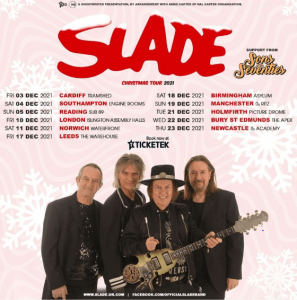 Now in 2021, Led by founder member Dave Hill on Lead Guitar with John Berry who joined in 2003 on Lead Vocals, Bass, Acoustic Guitar and Violin.  John has also played Bass with Mud, The Sweet, Screaming Lord Sutch, The Tremeloes, Bay City Rollers & The Rubettes. Joining John on Lead Vocals and Keys is Russell Keefe, having played in many original bands in his early years, he has also recorded albums for Polygram & United Artists, Russell has toured with The Pretty Things and Les McKeown’s Bay City Rollers, Alex Bines now joins on Drums, Alex has toured with Wilko Johnson, The Rubettes and is also a Drum teacher.

SLADE first hit the road in 1966, touring throughout Great Britain and Europe and becoming a regular concert attraction. Joining forces with the former Animals bass guitarist and Jimi Hendrix Experience manager, Chas Chandler, Slade achieved their first chart hit in May 1971 with the Bobby Marchan song “Get Down And Get With It” then, released in October of the same year “Coz I Luv You” was the bands first No-1 and a huge hit across Europe.

Slade are currently 3 dates into their UK tour, having played incredible nights in Cardiff, Southampton and Reading, and the rest of their tour schedule (which is below) is sure to be the perfect way for their fans to wrap up 2021.

You can grab yourself some last minute tickets here

For further information on SLADE, check out the following website / social media links: