Theatrical galactic-rock trio will play the Pyramid stage on Friday night, joining Coldplay and PJ Harvey on the lineup

Muse have been confirmed as Glastonbury’s Friday night headliners. The Devonshire trio join Coldplay on the lineup, and become the first band to headline the Pyramid stage on all three nights of the festival – having previously topped the bill on Sunday in 2004 and Saturday in 2010. 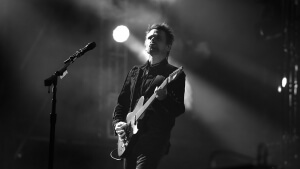 Revered for their ambitious live set-up – previous shows have included huge laser-beaming satellites, a trio of hydraulic tower blocks, a swarm of flying saucers – the band’s last headline set at Glastonbury focused mainly on the music. It did, however, come with some additions. “Steam flumes close Knights of Cydonia, honeycomb screens beam out hi-def visuals and pretty much everything they touch lights up – Dominic Howard’s drums, Matt Bellamy’s keytar and even the strings of his grand piano,” wrote the Guardian in 2010. “But otherwise Muse’s set is a ballsy, no-frills trawl through 21st-century rock’s most powerful canon.”

Originally from British seaside resort of Teignmouth, Bellamy, Howard and Chris Wolstenholme are famed for their sprawling and theatrical galactic-rock – not to mention singer Matt Bellamy’s conspiracy theories, of which which their last album Drones was inspired by.

“To me, drones are metaphorical psychopaths which enable psychopathic behaviour with no recourse. The world is run by drones utilising drones to turn us all into drones,” he explained in 2015. “This album explores the journey of a human, from their abandonment and loss of hope, to their indoctrination by the system to be a human drone, to their eventual defection from their oppressors.”

In spite of the convoluted concepts, the album was a huge commercial success, topping the charts around the world, including in the UK and the US. 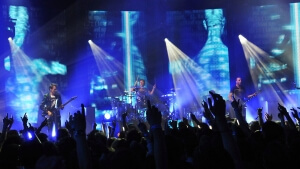