Ahead of the November 17th release of Morrissey’s new album ‘Low In High School’, which will be his first full length album since the 2014 release of  ‘World Peace Is None Of Your Business’, Morrissey has released the first single off the new album ‘Spent The Day In Bed’.

At first the song seems tame, as if Moz has been corrupted by mainstream music, as it is filled with synth, and the lyrics are lacking that sadness and confusion that was once so popular with The Smiths, then, just when you think Morrissey might have gone soft, the Morrissey which fans are all familiar with shines through in his usual, anti-everything way.

Warning people to ‘stop watching the news’ as the news ‘contrives to frighten’. 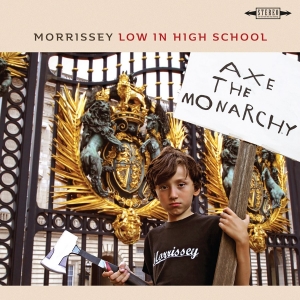 A song with synth ridden verses, and Johnny Marr style choruses, Morrissey not only explores new styles for his music, but also keeps that Smiths and early Morrissey guitar sound, which not only keeps the old fans happy, but will bring in the new fans as well.

Some might argue that the song could do with more guitar, as it is driven by a a heavy bassline and synths, all accompanied by a driving, yet simplistic drum rhythm, which is really a case of less is more, due to it’s simplicity, but without it, the song would be empty, despite all the other instruments.

Morrissey has used this album reveal, and single release, as a way to tease fans of the Manc legend, as he has now set up a twitter account, and has used it to tease dates of US tours, with English fans wondering, when or even if, this album will bring Morrissey home for a leg of his tour.

Another typical Moz element of this upcoming album is the artwork, featuring a young, axe wielding protester outside the main gates of Buckingham Palace, yet another jab at the monarchy from the ‘Queen Is Dead’ lyricist.

Along with the release of the new single, Morrissey, who is now signed to BMG, announced the tracklist for the rest of the album, with titles such as ‘Who Will Protect Us From the Police’ and ‘the Girl From Tel-Aviv Who Wouldn’t Kneel’, both of which have given Morrissey fans a glimmer of hope that Moz has stayed true to form, and kept his music political, his loneliness as clear as ever, and his controversial opinions as profound as they always have been.

This single will leave fans anticipating the release of the album, and will leave them wondering if they will get another taste of the album before is November release, or will Morrissey leave it at that.