Mercury Prize nominated and multi-platinum selling London quartet The Magic Numbers are set to return following a three-year hiatus with the release of their new album Outsiders, available through Role Play Records on May 11, 2018.

Outsiders captures The Magic Numbers fired by a renewed sense of purpose, immediately apparent on first single ‘Sweet Divide’, with the band’s melodic facility bolstered by a newfound, grittier sensibility. 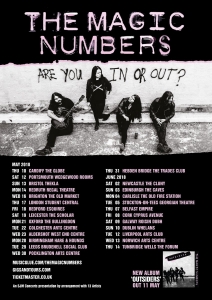 In support of the release of Outsiders, the band have confirmed a twenty-five-date headline tour of the UK and Ireland through May and June, including London’s ULU on May 17, 2018.

Comprising of two sets of siblings, Romeo and Michele Stodart and Angela and Sean Gannon, The Magic Numbers have sold over a million albums worldwide across their career and scored a slew of hit singles. The band quickly shot to media attention after selling out London’s O2 Forum Kentish Town Forum solely on the strength of their loyal fanbase prior to the release of their 2005 self-titled debut – an album that would later go on to pick up a Mercury Music Prize nomination and break into the UK Top 10 Charts.

Hit singles – including ‘Forever Lost’, ‘Love Me Like You’, ‘Love’s A Game’ and ‘Take A Chance’ – and three hit albums followed. Alongside the band’s success, the Stodart’s have lent a hand to projects including releases from Jane Birkin, Spiritualized, Chemical Brothers, Kathryn Williams and Ed Harcourt, plus Damon Albarn’s Africa Express, with Michele Stodart releasing two solo albums to date, duetting with Conor O’Brien of Villagers along the way.

I never wanted to be a part of anything, the cool kids at school, the pretend outlaws. I was always an outsider, we’ve always been an outsider band. We don’t fit in, never have and never will. Especially now. As you get older you realise your strength in not giving a f*ck. You realise what you’ve been trying to do your whole life. Create something that’s yours, your own world, your own views, make something special, start your own gang but always be YOU within it. Don’t conform. Don’t fall in line. Be free. Be inspired. Inspire. Live & Love. To all the Outsiders – Romeo, The Magic Numbers.