Lead single ‘Soul’ kicks Maker’s début album off in style, with a high-level energy boasting a glorious mid ’70s stomping rock sensibility, setting the overall tone and vibe that is to come over the next twelve tracks, making an instant impact.

It perfectly encapsulates everything good that the band stand for and want to accomplish with their music. 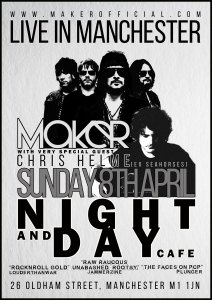 ‘Dead Ends & Avenues’ is perhaps best summed up as The Charlatans meets The White Stripes meets T-Rex and it’s quite the winning combination. Andrew Donaldson’s slick and mesmeric guitar playing on the final minute is sublime, making you eager to hit the rewind button to relive the magic. It’s this track – which the band all agree sums up their sound – that the album takes its title from.

When ‘Move Your Feet’ was positively reviewed last year, I stated that the swagger which the track possesses just immediately embeds itself into your brain and rolls around uncontrollably until your body gets into the groove. I stand by those words, enjoying grooving to this wonderful song once again. And again. Etcetera. ‘Girl Quit Your Crying’ slows things down with its bluesy and soulful sound. It’s almost heart wrenching in the way the song moves along and Alessandro Marinelli really allows his voice to guide the track with his rich and smoky undertones.

Bringing back the groove is ‘Quick Getaway’, moving along with a thumping imprint that worms its way into your brain and doesn’t let go. The verses blow the chourses out of the water here, which is something of a shame because if the chorus delivered a little more visceral punch then this would have been as close to perfection as you could get. As it stands, it’ll have to settle for simply being just an outstanding song, nothing more; a real highlight on an album that is loaded with gems.

A real change of pace comes in the form of ‘John’s Pharmacy’, bringing with it a folky and feel-good vibe. Incidentally, the album was recorded at Rockfield Studios in Wales, and it certainly feels that the natural beauty of the area seeped its way into the music on this exceptionally catchy and uplifting track. If you would like to forget the doom and gloom of the coldness of winter, then let this song pick you up and whisk you away to a far better place, at least for the duration of the song, and perhaps as the lyrics say, down at John’s farm, you’ll all be laughing and all get high!

‘Curtain Call’ has a dreamy, almost hypnotic vibe to it….., while ‘Soaked Up’ follows on nicely, with a brightness and sheen that stands out from the rest of the offerings, although clocking in at well over 6 minutes it perhaps loses its edge, yet remaining a relentless monster of a song. The final handful of tracks are more mellow and experimental, not least ‘Comin In From The Rain’, which is a nice change in pace, showing that the band have a diverse range and captures their live sound to a tee. ‘She’s On Replay’ rolls along with roaring vocals, while album closer ‘(Little Bit Of) Soul’ wraps things as the perfect bookend.

The Kent four-piece have created a sensational album of music for the small, tightly packed and once smoke-filled pubs (visually, this album fits like a glove in that environment) that easily transcends into larger venues, allowing the scale of the songs to match the size of the epic arena shows. The soulful rock ‘n’ roll warmth and swagger of the music on offer here, which was recorded in a mere fourteen days, is tailor-made for venues both small and large, and it’s a breath of fresh air to hear music this compelling.

An album of this quality could, and should, contribute towards saving the world of guitar music and propelling it back into the mainstream. This is the glorious start of a tale that will hopefully blossom into something larger-than-life for Maker, who are making music that they feel like making, and you have to salute that. Too often nowadays, artists choose – or are forced by the powers that be – to have a particular sound that is of the moment in terms of what is ‘popular’. The thing with taking that direction is that you risk becoming labelled, soon to become nothing more than a forgettable fad. Maker, however, are playing by their own rules, and their ‘new’ retro sound is nothing short of ingenious.