Speak Low If You Speak Love, Four Year Strong, Rob Lynch, Luke Rainsford, PVMNTS, Selfish Things and Cavetown will all be making unplugged appearances at Leeds, Hatfield and Birmingham over the May Bank Holiday weekend.

Rob Lynch will also be returning to Slam Dunk this year. Known for his twists on alternative folk and heartfelt crowd pleasures, Rob Lynch is definitely one to watch out for for a more laid back vibe. Luke Rainsford, hailing from Birmingham, will also take to the acoustic stage as his Slam Dunk debut. His highly-anticipated album ‘I Just Don’t Deserve to be Loved’ is set for release before the festival!

PVMNTS and Selfish Things will be making the translantic journey to the festival, as they hail from Los Angeles and Toronto respectively. Teen Wolf star Tyler Posey and the PVMNTS gang are set to bring a sincere sing-along to Slam Dunk, and Alex Biro of Selfish Things will be stripping back the rock hits for a more delicate, memorable rendition. Cavetown will also be bringing his ‘bedroom jams’ to the festival too, topping off this stage line-up perfectly.

They will be joining this already huge line-up: 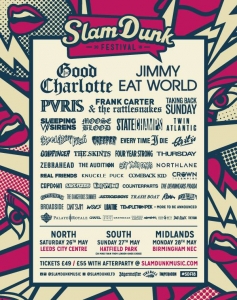 This is Slam Dunk’s biggest line-up to date, and you definitely don’t want to miss out! Tickets are still available for all dates here!