Foals have announced a major UK tour for 2020 including dates at London Olympia, Birmingham Arena and Cardiff Castle. Tickets for the tour go on-sale Friday 25 October.

The news comes ahead of the eagerly anticipated release of the band’s sixth studio album Everything Not Saved Will Be Lost – Part 2 on October 18. Recent weeks have seen Foals maintain a busy run of activity previewing the new album with three tracks. They also opened the Mercury Prize ceremony in style, performing In The Luna with guest guitarist Felix White of The Maccabees.

Collectively, Everything Not Saved Will Be Lost is symbolic of Foals’ trajectory so far. Everything Not Saved Will Be Lost – Part 1 debuted at number 2 on the Official Album Charts. Making it the band’s joint highest-charting position to date. The album earned them critical acclaim across the board including 5-star reviews from the NME and The Independent. Along with as a Mercury Prize shortlist and a Best Album nomination at the upcoming Q Awards.

Most recently, Foals unveiled details of a new documentary and concert film, Rip Up The Road. The film will be launched on Amazon Prime Video on November 15. It’s accompanied by the Rip Up The Road live EP which is available to stream exclusively on Amazon Music as a part of their ongoing Amazon Originals series.

Fans who pre-order from the Foals official store until Monday 21st October 11:59 pm will gain early access to tickets for Foals’ UK headline tour in 2020 on Wednesday 23rd October at 9.30 am. Purchasers will also receive Black Bull, The Runner and Into The Surf provided as instant downloads when pre-ordering. Everything Not Saved Will Be Lost – Part 2 will also be released on CD, digital and vinyl formats. Special editions include an orange vinyl that will be available exclusively through indie stores and a picture disc which is designed to be added to the Everything Not Saved Will Be Lost Collector’s Edition boxset.

The Foals UK Tour 2020 dates are as follows:

Tickets for the tour go on-sale Friday 25 October at 9.30 am via the usual retails including Gigs and Tours and the band’s own website.

Foals have partnered with Twickets as their official ticket resale platform to protect their fans against ticket touting. Twickets is an ethical ticket resale marketplace, enabling fans to sell spare tickets at face value or less. 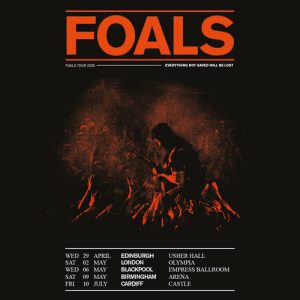