After some tour teasing earlier this week, Green Day, Weezer and Fall Out Boy have gone and announced that they will be joining forces for the Hella Mega Tour. The UK and Ireland dates will take place in Glasgow, London, Huddersfield and Dublin next June and that is not all to get excited about.

Green Day frontman Billie Joe Armstrong told Beats 1 presenter Zane Lowe “It’s kind of a Green Day idea, and we talked about how we weren’t really wanting to do stadiums and do something that was like a throwback to Monsters of Rock Tour.”

Looking at the tour from a different angle Fall Out Boy’s Pete Wentz said “To me, I remember, in the 90s, there was this one summer, and Guns and Roses, Metallica went on the stadium tour and my parents didn’t let me go to it. You want to recreate that memory. Hopefully, if somebody who gets to go to the tour, and I think this tour represents counter-programming. I think that the world is moving in one direction in an obvious way, or whatever. I think that this tour represents counter-programming to that and it’s awesome to take part in that and be a small part of it.”

Now if the news of the Hella Mega Tour isn’t, well mega enough all three bands dropped new tracks today also. Green Day have released Father of All from their upcoming album of the same name, which is expected to be released February 2020.

Weezer melted together some hard rock and catchy pop for their new song The End of the Game. The track is also from their upcoming LP Van Weezer, due for release in May. Weezer lead singer and guitarist Rivers Cuomo, also speaking with Lowe, said that the album “Is just all guitars. A hundred guitars,”

Tickets for the Hella Mega Tour go on sale from 10 am on Friday, September 20 with several ticket retailers including Ticketmaster. Early access to tickets can be gained by pre-ordering the new album here. 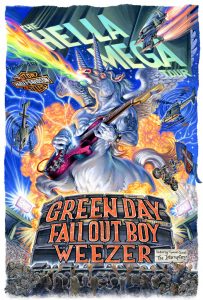