Press To Meco has announced a free intimate show at the Gibson Guitar Showroom, London next week. The event is in support the release of their explosive new single Easy Life, which is due to be released September 20 on Marshall Records.

The event will take place on September 19 and a limited number of tickets can be gained through the band’s social media accounts at noon tomorrow (September 11 2019). The tickets will be available on a first-come-first-serve basis, so fans are going to have to act fast. 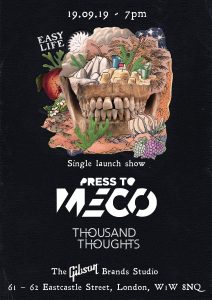 “We are extremely excited to announce we’ll be releasing our brand new single, Easy Life, on September 20th.” Explained Press To Meco “To celebrate, we’ll be playing a FREE ENTRY single launch show at Gibson HQ London. Limited tickets will be available from 12 pm tomorrow, check back on our socials at this time for a link to grab them. See you all there”

The West Sussex and Greater London based progressive hardcore rock, pop and metal trio will also embark on a 16 date UK headline tour this October. Chapter and Verse will be providing support throughout the tour which takes place at the following location on the following dates. 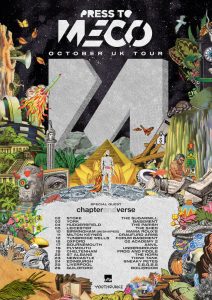