The Xcerts have announced a 10th-anniversary edition of their debut album In The Cold Wind We Smile. The release will take place ahead of a winter UK tour to celebrate the album’s first decade.

The reissue has been remastered on 180mg white vinyl and will include a download card of 13 exclusive bonus tracks. The release, on 22nd November, will also include a fold-out poster.

The band’s lead singer and guitarist Murray MacLeod explains a bit about the thinking behind the reissue “To think it’s been 10 years since the release of our debut record is pretty wild. It’s been a hell of a journey and the fact we are still an active band who are able to reissue a record for an anniversary is really cool. We’re currently in the studio working on our new album but we’ve been knee-deep in nostalgia putting together the reissue and we’re really looking forward to playing the album in its entirety throughout November and December. We haven’t played some of these songs since the release of the record so it’s going to be a trip but we’re stoked to hit the road and turn up the amplifiers in celebration.” 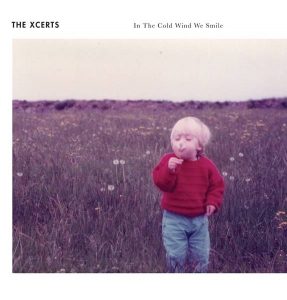 Old, wise and jaded beyond Murray, Jordan and Tom’s years, In The Cold Wind We Smile set the band on a path they’ve continued down ever since. The Xcerts have evolved their sound album to album, but the essence of what makes them who they are in the fabric of these songs. Despite the isolation and desperation that courses through them, they’re the wide-eyed and hopeful blueprints for the earnest, wild heart dreaming that defines them to this day. Even on its own youthful, unsteady terms, In The Cold Wind We Smile, is a powerful tribute to and expression of the trials and tribulations of being alive, of being in love, of knowing that both those things could be taken away at any moment. Yet as much as it mourns the fact that everything will always end, it also revels in keeping memories – however distant they may be – of all those things alive.

This is, then, an album that reminds you of how it feels to be young long after your youth has ceased to be. It’s where it all began. Not because it’s the band’s first album – although it is that, too – but because there is a broken magic in by these songs that have remained just as potent as the years have passed by.

The Xcerts UK Tour dates are as follows:

Tickets are on sale now from the usual retailers including See Tickets.