The Album Follows A Successful EP

The band will host an album launch in Leeds in November

Deathretro have released their debut, self-titled LP and it’s fierce from the off. It follows on from the release of their ‘Electric Rooms’ EP, and there’s a sense that this really is just the beginning of this band’s journey to the upper echelons of the music industry.

Made up of 10 tracks, the album is an upbeat kick to the teeth from the off. There’s a certain rough and ready feel to the album as a whole, echoing a similar vibe to those pre-debut White Stripes tracks. It does have that whole early 2000’s indie vibe to it, reminiscent of the likes of The Fratellis, The Libertines and The Strokes. The guitars echo similar tones, with the rhythm running a slight overdrive and the lead going with a sharp and bright tone for the extra bite.

Vocally, there’s elements of everything in there. The vocals fall above the instruments in similar patterns to David Byrne, but the tones say more Jack White or Kurt Cobain. It’s a bit raw round the edges and it sounds fantastic paired with the warmth of the guitars and driving bass.

What they have achieved with this album is a sign of what is starting to come through, especially in Manchester where the band are based. There’s a wave of bands starting to mix the synths and effects of the 80s with the gritty, raw tones of the 90s and early 2000’s, culminating in a rather special sound, somewhat rough and on the edge, but finely tuned to keep it from straying too far either way. 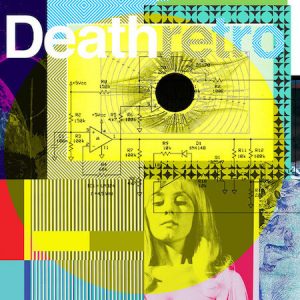 I always like to hear bands where the influences have to be searched for rather than being blatant and in your face, and Deathretro are one of those bands. From listening to this album alone, you couldn’t pin down one exact influence, there are small nods to certain bands for sure, such as Talking Heads and those early 2000’s indie bands as mentioned above, but I wouldn’t place any money on a band having been an influence on the music these guys are creating. It’s great to see a variety of influence, laden with their own magic touches to create one of the best debut albums for a good while.

Deathretro will perform an album launch at Leeds Oporto, featuring Elara and special guests The Wind Up Birds. This takes place on 4th November and is sure to be a pretty special night. You can snap up a ticket here. Whilst you’re at it, why not grab a copy of the album too, with limited vinyl available, which can be purchased following this link.