Seven Extra Dates Have Been Added To The Already Extensive Tour

The band are now estimated to be playing to around 65,000 people on their tour this Autumn!

With a lot of the already announced shows having sold out, and tickets for the others being in exceptional demand, DMA’s have decided to add SEVEN extra dates to their Autumn 2021, UK and Ireland tour. This means that the band will now play three dates at Manchester’s Victoria Warehouse, as well as extra dates up and down the country in venues they were not previously visiting.

Tickets for the extra Manchester date are already on general sale, so grab them while you can. The tickets for the other extra dates will go on general sale at 9am, Friday 30th July. The tour is in support of their new album, ‘The Glow’, and will be the first time they get the opportunity to play the album over in this country. 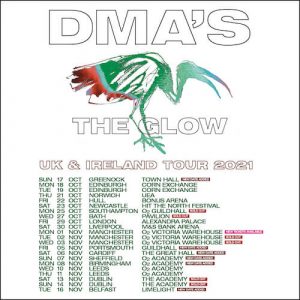 The tour is set up to a landmark moment for the band, as not only is it their first run of UK gigs since the Pandemic began, it will also see the band play some monumental gigs, such as a 10,000 capacity show at Alexandra Palace, as well as a similar scale gig at the M&S Bank Arena, Liverpool. The Liverpool date will be extra special for frontman Tommy O’Dell, whose father’s family hail from the city, so it will be a sort of homecoming for the frontman. With the latest additions, the band will play to 65,000 people across the tour.

The tour starts mid-October, and runs through until 16th November. The full schedule is as follows;

You can purchase your tickets HERE, and that is for the new dates, as well as the previously announced run of dates.