Their New Album Releases In January

‘Magnificent Hurt’ is the new single from the band and it’s out now!

Elvis Costello and The Imposters have announced that on 14th January 2022, they will release their new album ‘A Boy Named If’, and alongside the news of the album, have released the single ‘Magnificent Hurt’. The new single is available to stream now, and you can pre-order the album via this link.

Costello tells us, ”The full title of this record is ‘The Boy Named If (And Other Children’s Stories).’  ‘IF,’ is a nickname for your imaginary friend; your secret self, the one who knows everything you deny, the one you blame for the shattered crockery and the hearts you break, even your own. You can hear more about this ‘Boy’ in a song of the same name,”

Speaking of the lyrical content of the record, Costello added, “Once upon a time, when I didn’t know what a kiss could do and didn’t even dare to caress, the way ahead was a mystery; a departing from that magic state called innocence for the pain that leads to pleasure and all that jazz.” 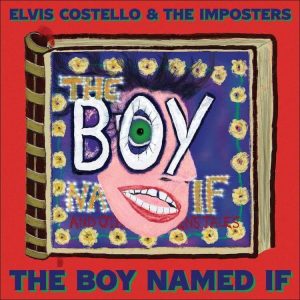 “Don’t get me started about the guilt and shame and all those other useless possessions that you must throw overboard before you set sail with your dreamboat (and a runcible spoon),” remarked Elvis.

The record comes from EMI, with Capitol Records as the release partner in the US. It will be available on vinyl, compact disc and cassette formats or as a download and in the stream with all the other pilchards. The 8-Track and Flexi-disc releases will come later. For those who like to hold something more substantial in their hands, the record can also be found tucked into an 88-page hardback storybook edition – each one numbered and signed by the artist. This edition features thirteen illustrated short stories, which have the same titles as the songs on the record. Some of these fables set the scene for the songs, others are sequels, or a clue or hint to what might have been going on before the music began. The lyrics can also be found in bold print alongside the colourful, dashing, sometimes macabre, daubs from the electric pencil of Eamon Singer.

‘The Boy Named If,’ – Produced by Sebastian Krys & Elvis Costello – is a collection of thirteen snapshots, “That take us from the last days of a bewildered boyhood to that mortifying moment when you are told to stop acting like a child – which for most men (and perhaps a few gals too) can be any time in the next fifty years,” as Costello put it.