The album is being released via Distiller Records. Listen to the first single here

Glasgow’s The Ninth Wave have announced that they will release their second album ‘Heavy Like A Headache’ on 11th March 2022, via Distiller Records. Alongside the announcement, the band have also released a new single and accompanying video, and you can watch it via the link above!

The news arrives off the back of an incredible tour for The Ninth Wave, as well as a Scottish Album Of The Year nomination for their EP, ‘Happy Days’. Heavy Like A Headache is the band’s second full length album following their 2019 debut Infancy which garnered widespread critical acclaim and nominations for the AIM Award Album Of The Year and Scottish Album of the Year.

Produced by the band themselves and mixed by Max Heyes (Massive Attack, Doves, Primal Scream), Heavy Like A Headache explores feelings of grief, anxiety, anger and loneliness, and represents the 4-piece’s most triumphant and diverse body of work to date.

New single “What Makes You A Man” tackles issues of consent, airing Millie Kidd’s deeply personal lyrics [“I will feel the shame that you don’t feel / And I won’t feel the same now this is real”] with a heavy, lurching instrumental that seethes with defiance. 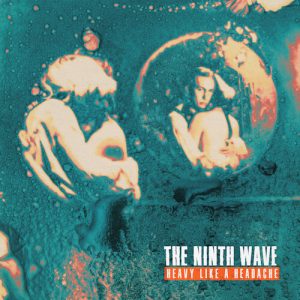 Speaking on the release, Millie said: “What Makes You A Man is as claustrophobic as it is cathartic. It’s a journey of self deprecation, and how one event can be such a throwaway meaningless action for one half but be life changing for the other. I don’t want to blame myself for the degrading actions of others anymore – I want to stand up to this shame I hold with me, and recognise that it is not mine, I’m just the one carrying it. It’s a hard one to swallow, but it’s a situation most of the women I know have been in. To be a ‘man’, do you have to dominate? To face your own mistakes, to look at yourself and admit that you were wrong – does that make you more of a man? So what does that make me?

We wanted to the put the listener into the scene of the song – everything is falling over itself, nothing is really in the right place at the right time. It’s sleazy, it sticks your shoes to the ground like the floor of a grimy club, it’s lonely but it’s too much all at once. From the noise saxophone to the endless guitar & synth feedback, you get an idea of what the inside of my head sounds like – I wanted it to be an unfortunately relatable discomfort.”