Two Great Bands Will Warm Up The Crowds

Their UK tour kicks off in April 2022

The Wombats hit the road for April 2022, and have now announced that Sports Team and The Night Cafe will be joining them for the UK dates, which will see the band play 8 dates in April, 3 of which take place in the hometown of The Wombats and The Night Cafe, Liverpool. After the UK dates, the band journey over to Europe, and commence a huge tour there, before returning to home shores for a show at Scarborough Open Air Theatre in May.

The tour is in support of the bands forthcoming studio album, ‘Fix Yourself, Not The World’. The news of the tour support follows on from the release of the latest single from the album, with the track ‘Ready For The High’. The track will be accompanied by a video shot while the band were together in the UK earlier this month, which captures the raw live energy they recently brought to the main stages of Reading and Leeds Festival and Neighbourhood Weekender.

About the track, frontman Matthew “Murph” Murphy comments: ‘’Ready for the High’ is a 90’s inspired track that I was excited to toss a load of trumpets into. The song is about being engulfed in a bad place, but rather than accepting this as immutable, acknowledging that it is only temporary and that better times are closer than they (currently) appear.” 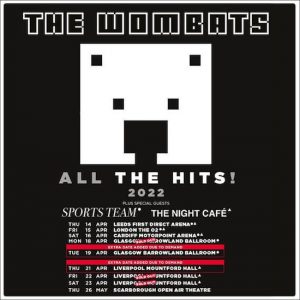 The band have been working on the album over lockdown from their own homes, and recording the tracks remotely. With frontman Matthew “Murph” Murphy in Los Angeles, bassist Tord Øverland Knudsen in Oslo and drummer Dan Haggis in London, they discussed each day’s plan via Zoom, then recorded separately, sending individual files to producers Jacknife Lee, Gabe Simon, Paul Meaney, Mark Crew and Mike Crossey to mix into the finished tracks. “It was pure madness, to be honest,” explains Murph.

With their biggest ever UK headline tour set for 2022, including a landmark show at London’s The O2 and two sold-out nights at Mountford Hall Liverpool, and their fifth studio album ‘Fix Yourself, Not The World’, due for release on 7th January 2022 via AWAL, this is only the start of what’s to come as fans new and old gear up for the next exciting chapter from one of Britain’s most adored bands.