Skip to content
Zuzu Releases Next Single From Upcoming Album

Zuzu’s Debut Album Is Set For A November 12th Release

The new single is the latest track to be taken from the forthcoming debut.

The release of the new single, ‘Lie To Myself’ follows on from ‘My Old Life’ the lead single from the album which came last month, which received praise from the media up and down the country, and was played twice by Tom Grennan on BBC Radio 1 when he sat in on their ‘Future Sounds’ show.

Speaking on the new single, Zuzu says; “Lie To Myself is about the process of coming out of denial, about that fragile state in-between a breakup where you’re strong enough to leave but not quite yet strong enough to face the full truth. The realisation that you’ve been living through a toxic relationship whether that be romantic or even professional and the impact that has on your mental health. It can be emotionally crippling leaving something behind that you’ve leaned on for so many years. It can feel like learning to breathe again. The song is about those times you hear they’re name or see a picture, whatever it might be that triggers that knot in your stomach. It’s about not wanting to hear the details about what happened, having no control over your emotional reaction to other people’s actions past, present and future. I’m still learning how to set boundaries in life, for myself more than anyone. Trying to stop my anxieties from spiralling out of control and not letting outside influences affect me. Protect your magic, it’s precious! 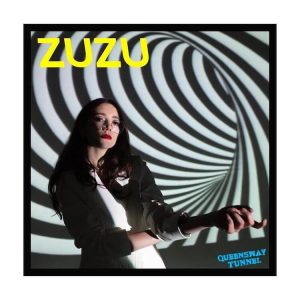 ‘Lie To Myself’ opens with a pulsing synth pattern, before her signature vocals kick in with a sort of spoken word pattern and the simple yet driving drum beat keeps things moving along nicely. The track quickly progresses into what is sure to become a sing along anthem at her upcoming headline shows. The energy never really dies off either, yes the verses are more stripped back than the chorus, but the songs pushes on throughout, with the hypnotic and captivating synths droning in the background of the simple backbeat.

When I heard last months release, I was eager to hear more and my anticipation for the album grew from that moment on, and now with this latest offering, the album really cannot come soon enough. There’s a certain individuality to Zuzu’s music and style that I can’t quite nail down, and it’s fantastic to see her managing to stand out from the crowd, especially one so saturated with bands having similar ideas and sounds. Putting her own spin on the genre is going to lead Zuzu to excellent things, and I personally cannot wait to watch her career grow, something I really don’t think will take too long.

Zuzu’s forthcoming debut album, ‘Queensway Tunnel’ is set for release on 12th November 2021 via Planet Z Records. You can pre-order yourself a copy via her website, where you can also create a custom bundle for the album!

Zuzu is heading out on tour later this year, please see below for the tour dates, and click here for tickets!