The new video for Puppy’s latest single My Offer is here. The single is taken off the band’s forthcoming sophomore album, Pure Evil due 6 May 2022.

Tickets for the band’s UK headline tour (May 2022) are on sale now, and they’ll be performing at both Outbreak and 2000trees Festivals this summer.

My Offer is the fifth single to be taken from Pure Evil, following Shame, ‘The Kiss which is currently zooming past 100,000 streams on Spotify and …And Watched it Glow. The track showcases a different side to PUPPY, with its sombre and spooky tone – which the video perfectly captures.

The London trio speaking about the new album explain “The mission statement for our new album ‘Pure Evil’ was to reach into every corner of our musical interests and put together something that felt free and fun. ‘My Offer’ is (hopefully) both of those things and a pretty rare instance of us pushing the tempo up a bit. In true Puppy fashion, however, we had to throw the nastiest, sludgiest riff on the record in there halfway through just to stop things getting too stale. It’s one of the new tracks we’re most excited about playing live for sure.”

While speaking about the video Puppy shared “We made the video for the track using an iPhone face-hacking app normally used for lip sync videos on Tik Tok, turning the technology instead onto scenes & characters from our favourite paintings by Hieronymous Bosch. ‘The Last Judgement and ‘The Garden of Earthly Delights’ are two triptychs which juxtapose fantastic images of divine purity & grandeur with some of the most nightmarish & grotesque visuals ever painted; idealised visions of pastel purity & Edenic excess rub up against strange, bestial creatures which torture one-another amidst Hellish tableaus. It all feels very Heavy Metal somehow. We figured that if anything could make these eerie creatures more surreal & unnerving, having them sing along to the latest Puppy track might be a good place to start.”

Live wise, the band’s UK headline tour for May 2022, which includes the shows previously postponed from their December 2021 tour, is currently on sale. Earlier this week the band announced that Inhuman Nature and Oversize will be supporting the band on the upcoming tour.

The full list of Puppy May Pure Evil headline dates are as follows:

Support from Inhuman Nature from Manchester through to London. With Oversize from Exeter to Leeds.

Pure Evil, is out on May 7th through Rude Records, pre-order the album on all formats. Digital – Link Here/ Physical – Link Here. You can stay in the know about Puppy via their Facebook page.  Plus Twitter from where they tweet as @puppyvybes. 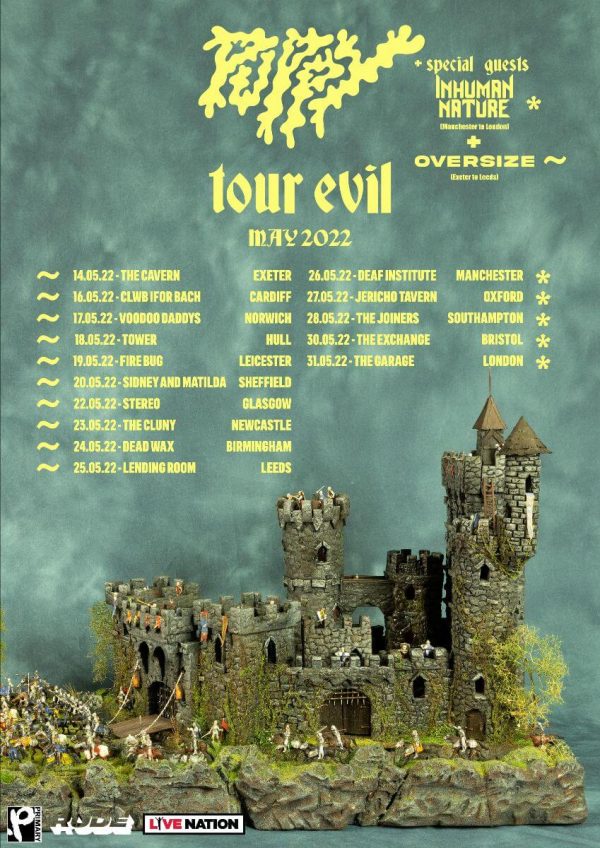