You don’t know it yet but Blossoms are going to be your new favourite band, they shine through the current dredge of pop mire like a blinding light in the fog, mixing both catchy tunes with swagger and belief in equal measure.

Tonight we are at Electric in Brixton. A smallish theatre style venue which has the tiniest upstairs seating area for what looks like one row, which makes those sitting there look like royalty, or maybe the muppets! 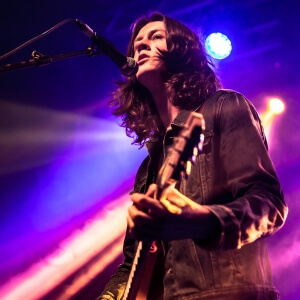 The main act is Jake Bugg and you can read the review of his set in another article here, but first up is Georgie, a young singer songwriter from Nottingham, although you would be forgiven if you thought she was from the other side of the pond. Georgie has soul mixed with a country tinged voice, she could probably do a credible version of either an Amy Winehouse or Johnny Cash tune – but tonight she delights the crowd with some heartfelt lyrics and guitars, it’s a gentle warm up and warrants a return at some point with a full band to really appreciate what she is capable of. 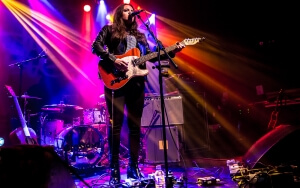 Then Blossoms take to the stage in hazy psychedelic smoke and lights. Let’s set the record straight first, this band are from Stockport, not from Manchester, but that’s close enough, and their sound could be described as a heady mix of all of Manchester’s pedigree, from post punk Joy Division to Smiths and Stone Roses – impossible to pin point just one, but its interesting that every decade the North West throws out a band that encapsulates the moment.

Blossoms have built up a reasonable following in such a short space of time, and with two Eps under their belts, they have more than enough material for this support slot in Brixton.

Guitarist and Lead Vocalist Tom Ogden controls proceedings, and they launch into ‘Cut Me and I’ll Bleed’ a liberating piece of psychedelic pop with Myles Kellock guiding the keyboard sounds to great effect. Synthetic sounds are as in focus as their guitar peers, they are needed in equal synergy to produce the texture. Ogden carefully introduces a different member of the band after each song and the crowd here are quickly drinking it all in.

‘At Most a Kiss’ is from their latest EP and has such bouncing bass and drums from Charlie Salt and Joe Donovan respectively, it’s classic indie pop with a twist and I defy anyone to hear it and not still have it ringing around their heads hours later. That is the template for other tracks and standout live song ‘Charlemagne’ is still in my head now as I’m typing this review.

The fuzzy sound of ‘Blow’ closes it, and Josh Dewhurst on guitar steps into the limelight after his introduction, and London has witnessed another sterling performance from this young indie band, Jake Bugg’s audience are perfect for them and I’m sure they will be queuing up to get their album whenever it is released. 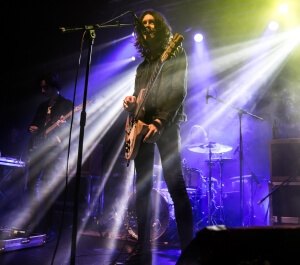 Punchy guitar riffs interspersed with some synth and catchy earworm choruses, an eager hard working ethic on stage, it all blends together beautifully – no wonder they made the top 4 of BBC Sound of 2016, and when they break into the mainstream, which will undoubtedly happen very soon, I guarantee they will be your favourite band for years to come.