Not many performers have fans queuing up 48 hours before the gates open to ensure they get the best possible spot for one of the world’s most enduring artist, the boss Bruce Springsteen has always had a bond an infinite contact with his fans.

The rain has been coming down all day, no one is complaining, after all we are in Manchester. We have our own brand of sunshine here, you might call it drizzle.

As the Boss appears on stage he addresses the crowd “hello Manchester, back again”. Springsteen has had a long love affair with Manchester that has seen him return on many occasions.

All thoughts of rain have all but disappeared as Bruce and the excellent E Street Band launch into a 33 song three hour set, including an 8 song encore. “Atlantic City” was the opener quickly followed by “Murder Incorparated” and the excellent “Badlands”, it seems like the Boss has brought his own piece of the sun. 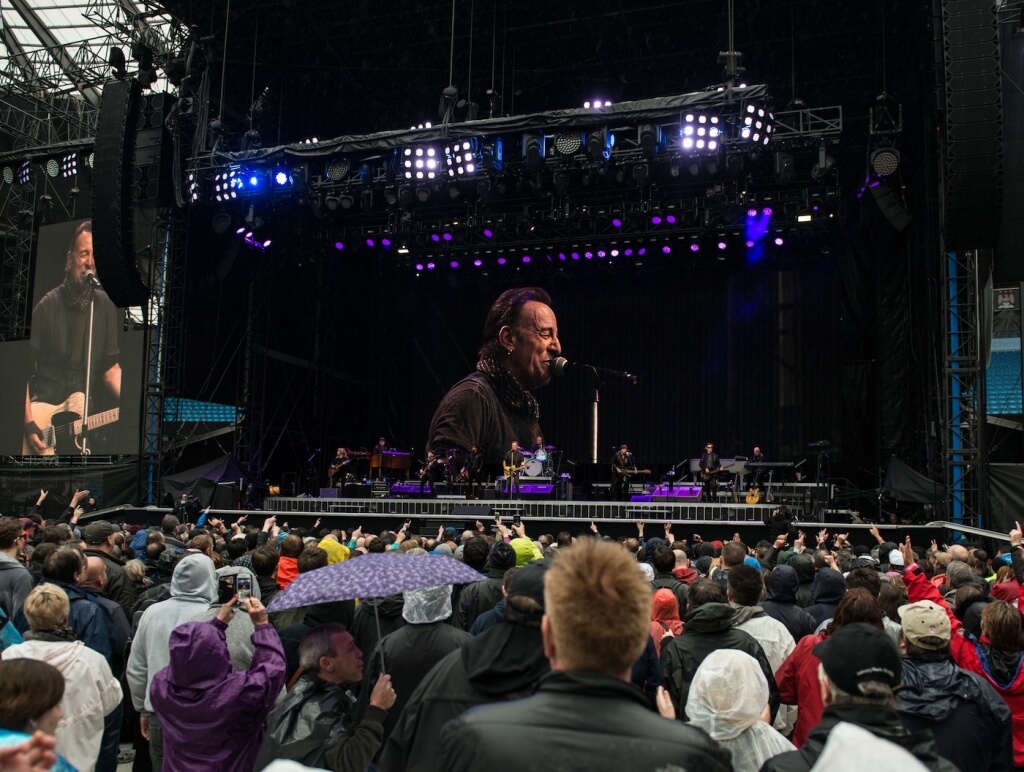 Springsteen’s voice has always had a depth and gritty soul, fuelled by a delivery and confidence that has surley come from an artist that has matured so perfectly over the years.
Fans are holding up cards with requests and The Boss turns to the crowd and says” you got help me out here” as a tall gangly fan wearing a red Father Christmas hat is ushered on stage to join Springsteen singing his request, “this won’t happen anywhere else” he tells the crowd as they launch into “Santa Clause is coming to town”, a magical moment and a lesson in how to get your request played.

“Hungry Heart” and “Darkness on the Edge of town” keeps the show rolling forward and the crowd in great voice, although there had been a few transport problems getting to the stadium, the best part of 60,000 people were being treated to another blockbuster of a show.

“Crush on you” along with “You can look (but you better not touch)”, bring back the years, with Springsteen acknowledging friends no longer with us.

“The River” gets the special treatment, all guns blazing guitars dirty riffs saxophone solos befitting the late Clarence Carter, and keyboards throbbing over a stadium totally under the spell of a master at work who has a story to tell, and tell it well. 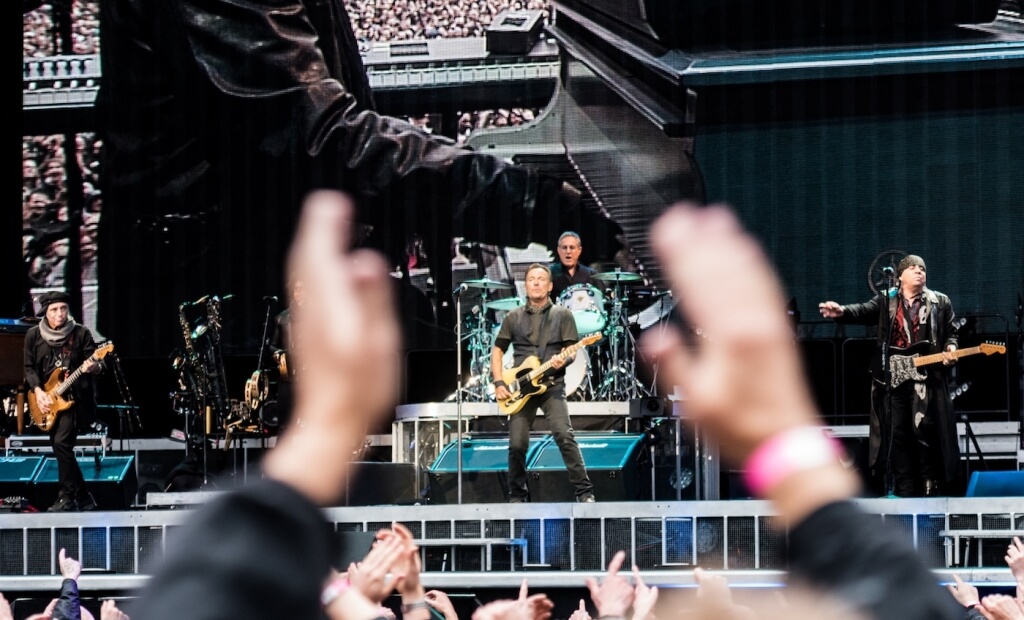 “The Rising” coupled with “Thunder Road” bring to an end a twenty four song set. With a back catalogue of songs that would give an encyclopaedia a run for its money, each concert is unique and a treasure in its own right, tonight is no exception.

First of the encore was “Backstreets” another request from the crowd, “Born to run”, with “Glory Days” blend seamlessly into “Dancing in the Dark”, as we approach the third hour of the evening.

“Shout” an Isley Brothers cover show the depth and influence’s Springsteen has embraced over the years. “Bobby Jean” has our host hollering to the band “One more time, one more time” to bring a crashing end to the first encore.

Returning to the stage for the final song of the night “This Hard Land”, was an intimate affair, a stripped back acoustic version, at times totally immersed in the song, it felt like a personal audience with the Boss.

The one thing you get from The Boss is heart a passion, stories of despair and hope, we may see others come to the fore, but for me there is and only will be one Boss.