Skip to content
Buck & Evans The Half Moon Putney

Last summer I attended the inaugural Ramblin’ Man Fair hosted by Team Rock. It was an event with a very specific demographic: less than fifteen sew-on band patches on your denim jacket? You need to consider an alternative festival, sir… The main ‘Classic Rock’ stage had some very significant acts upon it, any one of which could have qualified for free bus travel had they not arrived by executive helicopter. 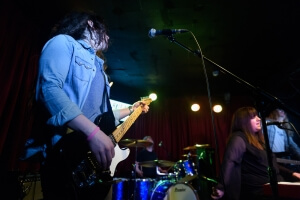 Meanwhile, tucked away on the naughty step away from the main stages was a lesser performance space known as the ‘Outlaw Country’ stage, and occupying an unassuming mid-afternoon slot were a combo I’d never heard of called Buck & Evans. Given the name of the band and stage, I was half-expecting a couple of good ole’ boys chewing corn whilst strumming banjos and singing about Old Dixie. What I wasn’t expecting was to be completely blown away by one of the best live bands I’ve ever seen…

Roll on eight months, and Buck & Evans (actually, Chris Buck – guitar and vocals, Sally Ann Evans – keys and vocals, Dominic Hill – bass, and Bob Richards – drums and vocals) have travelled down the M4 from their native South Wales for a gig at the historic Half Moon in Putney and I am very excited to be reunited with the quartet again. 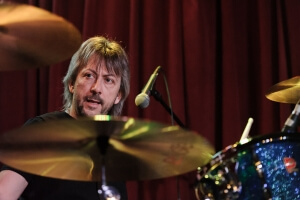 But before that, we’re treated to forty minutes and nine songs of the dirtiest of dirty blues rock from aptly titled London four-piece Dirty Thrills; a band previously unknown to me though not to an enthusiastic front row who told me to expect fireworks. They weren’t wrong. Opening with ‘Rock ‘n’ Roll’ from their eponymously titled 2014 album, Dirty Thrills’ charasmatic frontman Louis James leapt about like a clockwork Jagger who’d received too many turns of the key. And James wasn’t the only one pulling shapes with abandon. Stage right saw guitarist Jack Fawdry take on the trajectory of a ball bearing in a pin ball machine, whilst the only parts of bassist Aaron Plows that weren’t independently thrashing about were the waxed tips of his moustache. Steve Corrigan behind the kit was comparitively static from the waist down, but only because he was sat on a stool. Dirty Thrills are far from subtle, but then they’re not trying to be. The music was loud, fast, and great, great fun – and with all the posing and prancing around, the band are a music photographers wet dream. I look forward to catching the band again sometime soon – probably on a stage larger than this one. See full Dirty Thrills gallery and read more about them here 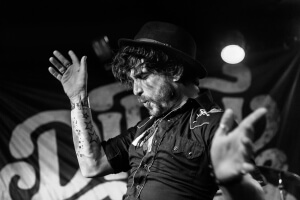 After a commendably short turn around, Buck & Evans take the Half Moon stage and I’m reunited with the sound and talents that excited me so much first time around. The rhythm section of Dominic Hill and Bob Richards are locked so tight that they would probably need a liberal dowsing of WD40 to go home in separate cars. The pair have been playing together for years and they understand each other instinctively. Richards has previously played with some rock royalty – most notably as one of the revolving door of drummers in Asia and in 2014 as Phil Rudd’s video double for AC/DC when Rudd was otherwise engaged with Antipodean law enforcement agencies. 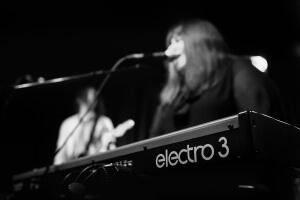 Fronting the band are the Buck & Evans part of Buck & Evans. Stage right stands Chris Buck. Save for his extraordinary platted/dreadlocked mane (actually, I’ve no idea what his hair does, but it is extraordinary), Buck is a pretty unassuming and understated guy to look at. But that all changes when you hear him play the guitar for he has a prodigious, captivating talent. He’s deceptive too; the style appears so effortless that you don’t expect to see broken strings flapping in the breeze a short way into the set – but flap they do and necessitate a change of guitar.

Sally Ann Evans gives the band a voice and it’s a voice that makes the hairs on the back of your neck jump to attention. Janis Joplin is the obvious, if somewhat lazy comparison; though Lynne Jackaman and even Adele are valid contemporary references. At one end of the spectrum, Evans puts an indelible mark on Otis Redding’s ‘Dreams To Remember’; a beautiful, soulful and emotive performance of this classic song. At the other, she blasts out lyrics with eye-popping power and dynamics. There’s such a movement of air during set opener ‘Run Cold’ and during ‘Screaming’ (surely the most apt song title in the history of apt song titles) that you feel she could be used to put out forest fires. Sally Ann takes mic in hand and delivers the bigger vocal performances on foot. The rest of the time, she sits behind a Nord Electro 3 electric piano, from which she delivers a less obvious, though intrinsically important part of the Buck & Evans sound. 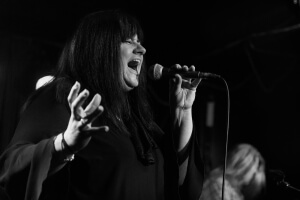 It’s hard to pin down exactly what Buck & Evans are. Whilst elements of the blues are threaded in their DNA, it’s certainly a progressive sound: there are thankfully no ‘woke up this morning’ type yawn fests here. Funky grooves abound and it’s definitely soulful, though I’m not expecting any horn parts anytime soon. The band don’t seek to be pigeonholed into any specific genres, though they had the moniker ‘rock ‘n’ soul’ applied to them and it’s one with which they are comfortable – so lets stick with that. Whatever they are, they are undeniably excellent. The writing is superb and is typified by my favourite tune ‘Ain’t No Moonlight’, a song that closes the set tonight. Fuelled by a funky, chugging riff, drum/bass groove and stabbing keys in the first half, the song breaks into an extended introspective instrumental section that is ultimately resolved by a blistering, building solo at the end that finds Buck at his very best. It’s a work of art and fitting end to the show.