Troxy, in Tower Hamlets East London, is a marvellous place. Constructed in 1933 as a grand Art Deco cinema, Troxy’s extravagant chandeliers and giant mirrors reflected the confidence and glamour of the early part of the period.

As with many such buildings, in later years it had experienced some decline – being left empty for a period and used as a bingo hall for quarter of a century. In 2010, a six-year restoration project was commenced, and the building – including its stunning Wurlitzer organ (the largest in Europe) – now gleams, rightfully occupying its place as one of London’s finest live entertainment venues. Your feet don’t stick to the floor. It’s that classy.

In many ways, Troxy is an able metaphor for the artist that tonight graced its stage. Garbage’s eponymously titled 1995 album and the sophomore ‘Version 2.0’ released three years later were both huge critical and commercial successes and the band had seat reservations at the top table of a rejuvenated 90’s music scene. Later records still generated big numbers though the general consensus in the music press (note, not fans) was that the band were seemingly losing a little of the creative juice that had made their brand of post-grunge grimy electronic pop-rock so invigorating. 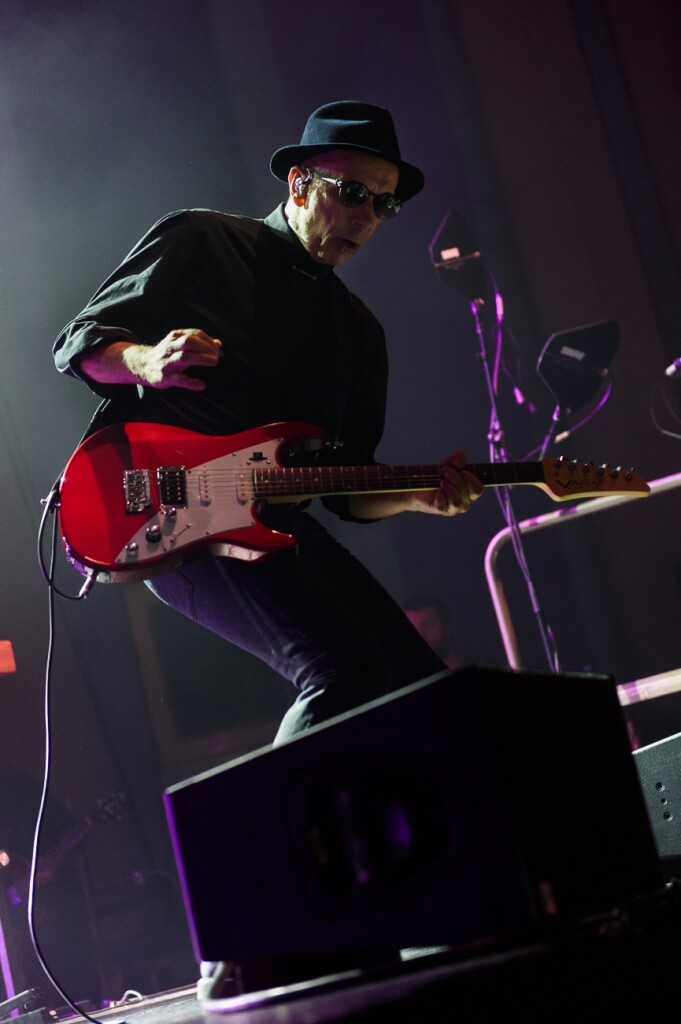 Garbage © Simon Reed | For Flick Of The Finger

Garbage released their sixth studio album ‘Strange Little Birds’ on June 10th. The new record has received rave reviews across the board and sits comfortably alongside the very finest material of their heyday. Eleven tracks of brooding electronica, some expansive guitars and spiky, maudlin lyrics; it really is superb. And tonight, Troxy is stuffed full of expectant fans, looking forward to welcoming songs from the new offspring. There are only two dates in the UK on this tour, so to be here feels like the privilege it is.

At shortly after nine, Garbage took to the stage. They opened with ‘Sometimes’, first track on the new record. Sparse and truly haunting, it’s not often a gig starts with a lyric like this: “Sometimes I’d rather take a beating, sometimes I’d rather take a punch. I learn more when I am bleeding. You knock me down but I get up”. Shirley Manson delivered the words in isolation from the stage apron.

As befits the material, the auditorium was extremely dark, save for occasional blinding strobes stabbing the performer and narrative from above. At the end, the crowd didn’t really know what to do – it’s not the sort of song you necessarily want to applaud. The band didn’t give people too long to worry about it though as the opening strains of ‘Empty’ – lead single from Strange Little Birds quickly rang out. It’s up tempo and loud, the lights came up and the people bounced. It might be a song about loneliness, desperation and infatuation, but it still felt like we were moving in the right direction.

With the lights up, it was our first opportunity to see what was really going on. Manson has swapped her fiery red hair for bottled pink but otherwise appeared completely unmarked by time. Commanding the auditorium, in her leopard print she looked every bit as sassy and sultry as when she first started telling us she was only happy when it was raining.

Behind her to her right, Steve Marker played some expressive guitar, as did Duke Erikson to her left – peering out as he does from below his trademark pork pie hat. Bass duties for this tour are being undertaken by Eric Avery (of Jane’s Addiction fame). Avery was stood to the left of a drummer that clearly wasn’t Butch Vig.

Shirley later explained that Vig hadn’t joined the European leg of the tour since acute sinusitis prevented him from getting airborne. Matt Walker (Smashing Pumpkins, Morrissey) kept the seat warm from behind the pink ‘G’ and the Plexiglas. It was a shame not to be seeing the full original band, though it certainly didn’t detract from the quality of the performance. 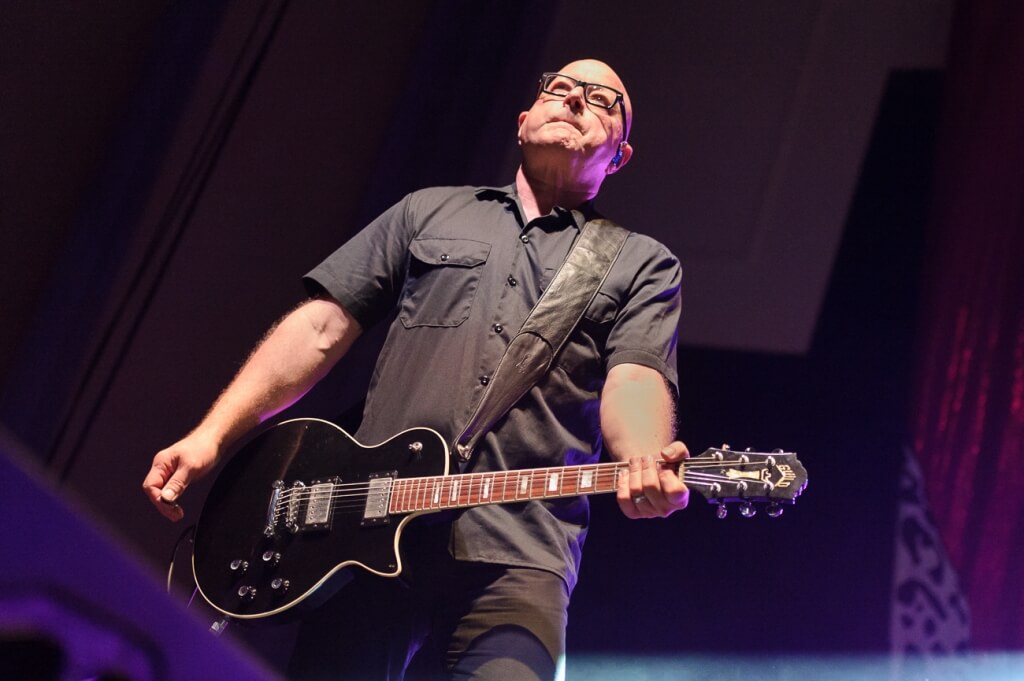 Garbage © Simon Reed | For Flick Of The Finger

So, two songs down and we’ve heard the first two songs on the new record. There’s a slight twitchy feeling that we might be heading down a ‘here’s the new album in sequential order’ kind of evening. Not an issue of itself – it’s a good record – but a bit of a shame when you’ve got the back catalogue of a band like Garbage. No need to fear. Next up: ‘Stupid Girl’ and everybody knows this. For those of us of a certain age, hearing one of the most instantly recognisable anthems of the 90s being belted out in this classic old room is a highlight indeed.

In fact, it was just one of a number of highlights in what turned out to be a very carefully crafted set of light and shade. For every twin guitar thrash out such as ‘Battle In Me’, there was a gorgeous carefully crafted builder like ‘My Lover’s Box’. When Manson spoke to the audience, she did so with genuine heartfelt emotion. She explained that UK shows are a particularly difficult homecoming for her – paranoia reigns about how she’ll be received. This probably explains why there are only two UK dates on this tour. Shirley dedicated ‘Sex Is Not The Enemy’ to the considerable support the band receives from the LGBT community; speaking about the horrific events 24hrs earlier in Orlando, she sounded close to tears.

They closed the set with ‘I’m Only Happy When It Rains’. By now the crowd were practically rabid. It turns out that 2,500 people screaming “Pour your misery down on me” make a hell of a din. The audience were brought back to earth by the encore: ‘Even Though Our Love Is Doomed’, another tune full of melancholy from Strange Little Birds. It’s a beautiful song, though as the title implies, it’s not a laugh a minute. ‘Why Do You Love Me’ gave everyone another chance to bounce into each other and the synthetic pop of ‘Cherry Lips (Go Baby Go)’ had them all smiling and hugging one final time.

With the buzz surrounding the new Stone Roses record and live stadium dates reaching febrile proportions, there’s no doubt about the ongoing appetite for a bit of 90s nostalgia. You could argue that Garbage are tapping into that – except that they’ve never actually been away. The new music puts a contemporary spin on their classic sounds and there was certainly no lack of energy or vibrancy in their performance tonight, which clocked in at close to two hours. A performance that even the glassy chandeliers in the theatre couldn’t outshine.