Interview and a live show:

Tonight I’m in Merthryr Tydfil to catch up with Halo Tora. I’d seen them before two years ago at the resonance festival, but this time it was the first UK gig after returning from their European tour, that took in France, Belgium, Holland and Germany.

The venue tonight is a new one for me, The New Crown is a pub that revels in putting on live music, and seems to be attracting some good touring bands too.

The band released there first album Omni One a year ago, and while a lot of their set featured songs from this album there were treats in store with new ones, in fact some of the songs don’t have titles yet, none the less it made for a good nights entertainment and Wales were certainly rocked by this five piece from Glasgow.

From the first bars of Trans/Zero to the Age of terror closing the set. The audience is captivated and new supporters are made. I couldn’t help but notice at one point Chris’s hood went up, I thoughy is he trying to look like the grim reaper? I guess being Halloween that’s most likely. This was later confirmed. My own personal favourite was in there too, The Bones that rock the cradle, this band gives it there all and are rocking together 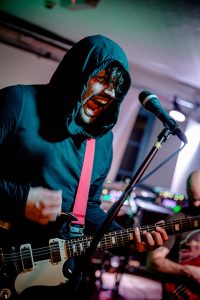 Halo Tora| © Sam Holt | For Flick of the Finger Magazine

During the Age of Terror Chris suddenly grabs a chair and is sat there playing and at the end giving the rest of the band a round of applause, not that he needed to of course. They definitely made an impact tonight, not only people asking for more, but the crowd chatting with the band about the music after, merchandise sold, and new fans made along the way.

Prior to the gig, I caught up with the guys to discuss the tour, the album and their future plans.

Why the name Halo Tora?

Watching the film Tora Tora Tora and I liked the word Tora, while it’s the Japanese word for attack I wanted something that went with it but oppose it. So Halo being angelic and Tora being attack in Japanese, just thought it made a nice contrast.

I think it’s been a rollercoaster, there’s been some high points and some seriously low points, an example being the second day of the tour. The high point being the London show was excellent, but when we went on stage we didn’t know if we were going to Europe, as our van had broken down that day, it set the tone, some good parts and some really scary parts.

How would you describe your music?

Difficult, I think we touch on everything you consider rock music, heavy in places and definitely have got that prog feel some of the passages that people expect from progressive music. I prefer though, to say were an alternative rock band and the big focus is on the guitar.

When we started the band we tried many different sounds, and we tried to get that into songs, in time its developed into a sound we now have.

How did you meet and form the band?

Chris and Chris were in a band called Anavris, Mark was in another at the time, when Anavris split Chris and Chris were looking for a new project, Ryan met Chris in a guitar shop and was invited to try out for the new project. All knowing each other on the Glasgow circuit Ian joined later, and the last piece of the puzzle was Mark when he joined, none of the other bass players we had before were sexy enough!

You sold out Glasgow, outside Glasgow where would you say you were most popular?

London; always surprised when we go down to London, always a solid number of people who turn up.

Also every time we go to Inverness, we have a lot of people turn up so I’d say Glasgow, Inverness and London.

I think if we get back out Germany we’ll have a good crowd, the gig near Stuttgart was really surprising, or even Belgium.

Our type of music goes down well in certain parts of Europe, they just seem very receptive to what we play.

If you weren’t in Halo Tora, what you be doing tonight?

Out running with my dogs.

I play in two other bands so pretty much rehearsing all the time.

Id be lying on the couch amazed I got through the weekend, we generally rehearse on a Sunday.

Monday’s a day of recovery for me too, after not sleeping much on the weekend.

I’d be shouting at kids.

And your future plans?

We can answer this, this is an exclusive! We are about to record another album, the majority of its written, about 80% of its there and we’ll work on it as we go?

How do you record? Collectively or individually?

Both, although we’ll probably go into the studio and get the drums down as a live band, some of the best takes are when you’re playing as a band, most of my bass takes will be take at this time because we play as a unit, I like to be playing alongside rather than along to.

As a guitarist its nice to be able to play over that, we’ll dub that separately but have a really natural rhythm sound, makes it easier to put your guitars down, that’s how it works for us.

When the album comes out I’ve been promised a copy for review, definitely looking forward to this.

The bands final gig of the tour is Friday night, Audio in Glasgow and is going to be a fantastic night, it’s a sell out gig and I bet will be a great’ homecoming for a band that’s gaining new followers from, not only Scotland and the UK, but now Europe as well.