Skip to content
Love Is In The Air! James Manchester Arena Review

Solidarity, harmony and peace were just a few of the positive vibes floating in the air on Friday night at Manchester Arena (13th May 2013)

When a certain gig happens in a certain town with a certain crowd – amazing things happen.

The unforgettable night opened up with Manchester’s very own The Slow Readers Club. The four-piece, made up of Aaron Starkie – Vocals/Keyboard, Kurtis Starkie – Vocals/Guitar, James Ryan – Bass and David Whitworth – on Drums.

The band specialises in dark and brooding indie electro and their music has drawn comparisons with Interpol, The Killers and The National. On a personal note I hear tones and similarities of the Editors & Joy Division too and lets face it, you’re gonna go too far wrong when your sound is being compared to those kind of heavyweights.

The bands last five singles have enjoyed airplay on BBC 6 Music and XFM (featured twice as XFMs shock of the new) the latest single ‘Plant The Seed’ has been playlisted on TXFM Dublin.

The Slow Readers Club have been getting rave reviews for their live shows, including sold out headline shows at Manchester Gorilla and Academy 3, Isle Of Wight Festival, Tramlines Festival, Ramsbottom Festival and Blackthorn Festival (including support slots with ‘Catfish & The Bottlemen’, ‘The Struts’, ‘Reverend and the Makers’ and ‘The Sunshine Underground’ ) Keep an Eye out for these boys! Class act!

Next up Jack Savoretti. In all honesty not an artist who has crossed my path however he’s been making big waves of late appearing on ITV’s Tonight At The London Palladium and BBC Radio 2 with Jules Holland. Listen to the show here

Signed to BMG Chrysalis Jack, has the influences of Crosby, Stills, Nash and Young, Simon and Garfunkel and Johnny Cash. A very talented musician with a bright future ahead after his testing start in the music industry.

In an interview with the independent Jack told the story of how around seven years ago, he was touted as a rising star. He was pitted alongside Paolo Nutini, a fellow genetically-gifted Anglo-Italian with a guitar and a few melancholic stories to tell. Read more about that here

A combination of The Slow Readers Club and & Jack Savoretti made for a perfect warm up for James as Manchester arena filled up to the brim.

James walked on stage to a rapturous applause. Heading up the band Tim Booth, dressed in is his signature sheep like tank top hoody and his frequently seen baggies, welcomed all and informed the crowed that he likes to get up close and personal, with this in mind he requested to be handled like “porcelain” should he make the trip in to the fans.

James started things of nice and slow with Out To Get You. With the lights dimmed with a neon blue glow Tim’s unmistakable signature moves started flow.

Taking the tempo up a notch for the Manchester crowd, Move Down South followed. Track 9 from the bands 14th studio album Girl At The End Of The World.

Two thirds in to the track the crowd had an unexpected visit from Tim as he made his way down to the pit and climbed up on to the front row barrier. Supported by the crowd he serenaded them for a short time before seamlessly falling forward for some crowd surfing action.

To see the affection from his fans at this point was just incredible. Love was definitely in the air and one lucky fan got a lot more than he bargained for. Only 3 minutes before this image was taken I was chatting to said lucky fan who was asking where my pictures will be posted – Well we hope he sees this one… 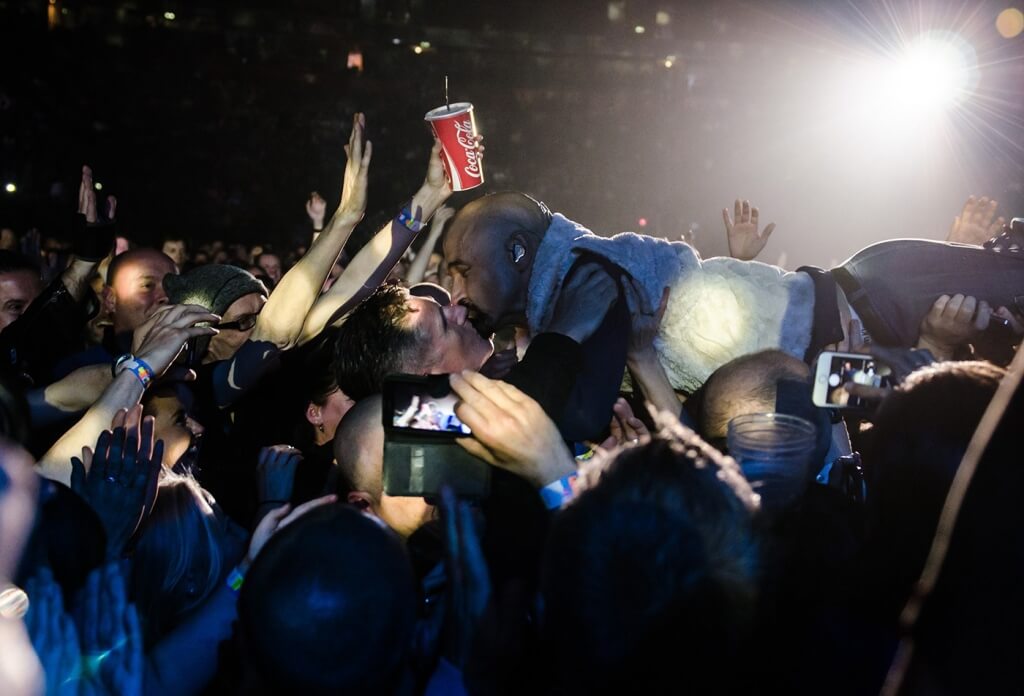 After disappearing briefly Tim, finally re surfaced with a few additional scratches on his neck and moved on to the 3rd track of the night To My Surprise, the 2nd track of the bands latest studio album.

I think at this point it’s worth mentioning the bands drummer David Power. With Tim on vocals and his funky dancing accompanied by Trumpet players, Keyboardist and other band members it’s easy to lose Power at the back of the stage however let me tell you this, this guy is immense! Impeccable time keeping, he really is a large part to the band’s overall sound and vibe. Throughout the night I often found myself paying more attention to him, as Tim was either crowd surfing or elsewhere in the arena “Sitting down” with his fans. Class act, top marks

More new songs followed with Surfers Song and Catapult. Two more newbies to the set list before taking it back with Come Home.

Fast-forward to 92’ for Ring the Bells next. Track 2 from the bands 4th studio album, Seven. No signs of tiring at all from either Tim or the crowd. Tim’s style of rhythmical and majestic dancing is enough to keep anyone entertained. Mesmerizing movements with twists, turns and what should end in a tangled mass – somehow just doesn’t… ACE!

Sometimes, P.S, Girl At The End Of The World, and Bitch to follow before slowing things back down again with a really nice acoustic version of She’s A Star. A great rendition that effortlessly fits in to the set. Probably one of my favorite James tracks so to hear this version live was a nice bonus…. Perfect! Following the acoustic classic, another with stripped back rendition of Just Like Fred Astaire from their 99’ album Millionaires.

Rounding off the final quarter of the night with Dear John, Honest Joe and Sound which was followed by boo’s from the crowd as Tim announced that Attention was to be the final of the night, describing it as “our most beautiful song”

Following the tongue in cheek boo’s, Tim suggested that the crowd had not had a great time, resulting in some of the loudest cheers of the night putting that theory to bed. The 15,000 plus fans were all on their feet by this point and no doubt the hair on the back of their necks stood on end in anticipation for the inevitable encore.

After leaving the stage for a short time Tim reappeared to everyone’s surprise at the back of the arena under a spotlight. Making his way down the steps to the bands most anthemic melody singing the iconic lyrics “I’ll sing myself to sleep, A song from the darkest hour” and was quickly joined by pretty much everyone in the audience.

A truly momentous moment for everyone.