An all-star Manchester line up take to the stage at Manchester’s Old Trafford Cricket Ground.

With a sell-out 50,000 crowd, four of Manchester’s hottest bands entertain a “united city” crowd who travelled far and wide to attend the gig of the year.

With recent events terror events taking place just less than 7 days before, it’s only natural that security at such an event was stepped up. With armed police, riot vans and a bobby every 20 feet on the streets outside the venue, there was no sign of nerves as it was smiles all round, even on the faces of the armed police. Arhhh

It’s the first music event I’ve been to at the Emirates Cricket ground and I think it’s fair to say that some questions have been raised as to whether this is a venue to take on such a huge gig. Gig goers were quick to take to the venues facebook page with their concerns regarding’s queues at bar’s and toilets… two essentials for any gig attendee. I didn’t witness any issues myself however many did. There were also comments on the sound, however, where we were stood everything seemed superb. Its also worth mentioning that a few flares made there way in to the gig too – how thorough were the bags checked?

First to take to the stage were Cabbage. A local band making noise a lot further than just Manchester of late. The politically charged five piece took to the stage acknowledging that it’s been quite a difficult week in Manchester, however, they demonstrated what they were all about and proved the show must go on. The band came across a little more reserved in comparison to their regular more intimate gigs, maybe it was quite daunting being on such a huge stage? Nevertheless, they held their own, Joe still managed to lose his shirt and over all they were very entertaining… you can’t ask for much more than that. 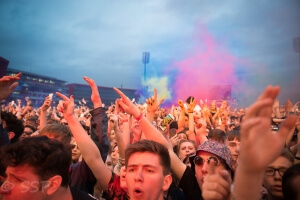 There aren’t many bands out there who performed more gigs than the Blossoms in the past 18 months. With over 160 gigs, festivals and various other promotional appearances along with a number one album to show for their hard work, you can’t deny that these lads are one of the hardest working bands in the industry – its certainly paying off for them now.

Blossoms appeared on FOTF over 20 times in 2016 and if I were to write another review on their performance from this show – I’d have to say, it wouldn’t be too much different to the ones we’ve already published. A very stable band, extremely tight and excellently delivered. Exactly what you would expect from a band who have performed such a number of gigs…

Opening their eight-track set with ‘At Most a Kiss’ and closing with their ever popular ‘Charlemagne’ they certainty had their fans bouncing: 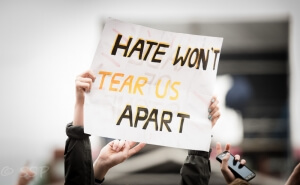 The Charlatans released their 13th studio album the day before this momentous gig, taking over Manchester’s Northern Quarter with various events – what a great opportunity playing to an Emirates crowd, promoting their new music to new and older generations. Well played…

Opening up with their classic ‘North Country Boy’ to a rapturous crowd the band played a mixture of old, recent and new tracks from their back catalogue.

1. North Country Boy
2. Weirdo
3. Plastic Machinery
4. Just When You’re Thinkin’ Things Over
5. Let the Good Times Be Never Ending
6. Different Days
7. One to Another
8. The Only One I Know
9. Come Home Baby
10. Sproston Green

After 27 years on the circuit it doesn’t come as a surprise that Tim and the lads nailed it; sounding better than I’ve seen them before whilst fashioning some iconic Manchester swagger. A perfect choice in main support!

“for the first time in a week, many people were in a place not giving atrocious acts a 2nd thought”. 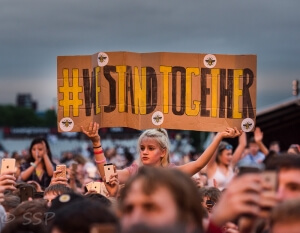 By the time the Courteeners took to the stage, the 50,000-people that had stuffed themselves in to the venue were well on their way to being warmed up by the previous three bands, enjoying what is already set to be one of the best gigs they’ve attended.

Without the Courteeners even making an appearance tonight I’d have been very content for the gig to be over now, however, as this wasn’t the case… let the good times roll….

There aren’t many people who can pull off a white parka without looking like they’ve just walked off a set of Casualty, however, you have to give it to Liam on this one… top marks on looking cool as! Compliments also to the noise he was making from his frequently seen cherry red Epiphone, whilst hammering through the monstrous, twenty-one track set list, with some crowd stomping classics…

With the addition to Joe Cross to the Courteeners in 2015, you can definitely hear a new direction in the band’s fifth studio album ‘Mapping the Rendezvous’.

It’s certainly a much more mature approach with an underlining electronic feel with less anthemic numbers that may have split some of their fans however tracks like ‘Modern Love’ and ‘The 17th’ still bringing home the goods for such gigs like tonight and they went down an absolute treat!

Their set list was well and truly packed with all the tracks you would expect to hear with a couple of unexpected additions.

The set was opened up by the Ryan Williams poem which also made an appearance at the two warm up gigs… very moving and so uniting there probably wasn’t many a hair not stood up on end….

A particular highlight for myself and probably many others was a 50,000 sing-a-long of ‘Don’t Look Back in Anger’. Very touching and amazing to be a part of.

All in all, the gig not only lived up to expectations but it surpassed and delivered way beyond anything I could imagine and it was very warming to be a part of something so special given the recent troubles our city has seen.

Music certainly makes the people come together. Top marks to all involved and until next time… One love!

See our Not Nineteen for ever video here

Photography By: Billy Seagrave for Flick of the Finger