Skip to content
REVIEW: Sly Antics at The Burgess, Manchester

One small venue, one giant set.

After wonderful support, Sly Antics ended the night on an almighty high. 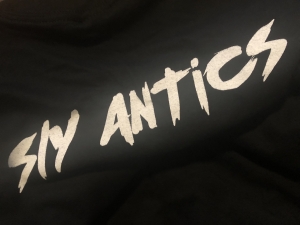 Want some Sly Antics Merch? read on for more details…

Sly Antics absolutely blew the roof off The Burgess with a short, but absolutely brilliant set, featuring covers of Kanye West and The Chemical Brothers, and some new material, which went down a treat with the screaming fans. The band kicked off the night with ‘Motion’, the perfect opener to get the already hyped crowd on their side. From here, things couldn’t get any better, and Sly Antics continued their amazing set with ‘Choose Your Words’ before powering into ‘Blinder’ and ‘Lights Go Down’.

The new material is sounding good, and is set to be released in the new year. However, judging by the fans reactions to the new songs, the release cannot come sooner, as the crowd were won over instantly by the wonderful music that was being hammered out in-front of them. Watch this space for some brilliant tunes, by the equally brilliant Mancunian trio.

It’s nights like this that put Manchester back on the map in terms of music, and this performance just shows that in the coming years, there are going to be some wonderful bands rising out of Manchester. All I would say to someone who doubts the Mancunian music scene, is to go to a Sly Antics gig, because they put on a show, and blow everyone away with their musical talent.

Possibly the best crowd interaction I had ever witnessed took place when bassist Chris put down the bass, and pulled from the side of a stage, Hungry Hippos, and played it with 3 members of the crowd, whilst Sam and Lee kept the crowd interested as they jammed out together, doing what they do best.

To win a free Slay Antics t’ simply share this review on facebook – simple give away! Good luck