It seems more and more these days, I find myself walking away from gigs saying the same thing… “that has to be in my top 5 gigs of all time”

That said there’s nothing better than going to a gig and seeing the band or artist perform like it’s their last ever show and I think it’s performances like these that make some gigs stand out over others. This was most certainly one of those gigs.

Ashcroft has been performing for the best part of 30 years and like many that are still touring from his era, he’s sounding better than ever. Still cool as you like, still has the immediate audience interaction, respect and still appealing to the younger crowd too, it was really nice to see the younger generation at the gig as their mums and dads reminisced to the Verve classics and his solo anthems.

The 8000 capacity crowd steadily started to fill the Manchester Castlefield Bowl as The Sherlocks took to the stage. Still at the beginning of their career most would agree, with their debut album about to drop in the next couple of months it still would have been nice to hear a little more diversity in their set. 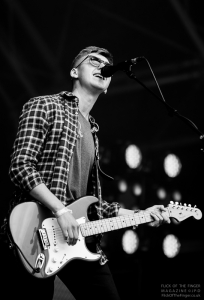 By now, some slower ballads or at the very least some different tempo songs would be a nice addition to their set.

At times it looked like there may have been sound issues, but it may have caused a couple of mistakes however crowd carried on as normal and looked to be enjoying them selves all the same.

Now, I’ve never confessed to being a reggae fan I mean, I may have but Bob Marley’s Legend album on at a BBQ or whilst looking at the blue sky on a beach with a Mojito in hand but who has it right? So when Bob Marleys producer, 81 year old, Lee Scratch Perry who takes to the stage…. well!! What a tremendous choice of warm up act to get people in the mood.

Love Is In The Air

Perry’s band opened up his set with an instrumental which at first confused a few people – probably quite a few were trying to figure out if he was actually on stage yet. (Probably just me) Lee walked on stage to track two as you could see a wave of fans slowly bobbing, weaving, waving and smiling – reggae music is such an infectious vibe, especially as the air turned to a rather earthy aroma, all of a sudden?? 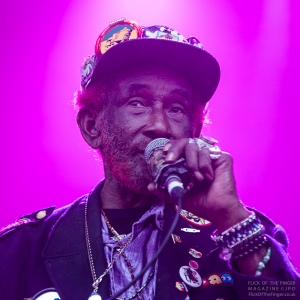 So due to a couple of what could have been tech issues, it was the first night after all, of the Castlefield shows, the Legend that is took to the stage a few minutes later than planned – no issue, just added more excitement and anticipation of the fans….

“Touched by the hand of a God”

With four huge strobe light boxes, a large video monitor showing TV’s and tv clips, Ashcroft takes to the stage with his frequently seen, jewelled jacket, grey roll neck and standard issue Ashcroft aviators. No gas mask on this occasion which has been making frequent appearances of recently, wonder if it was a decision based on recent events in Manchester…??

The set tonight was pretty consistent with what Ashcroft fans have being hearing across most European gigs. Opening ‘Out Of My Body’ then picking up his Gibson for the famous ‘Sonnet’ with a quick guitar change and straight in to ‘Space And Time’

It has to be said, Ashcroft has some far out moves when it comes to dancing but still as a way to go to match those of Tim Booth who’ll be making an appearance with James this week on the very same stage….

It was nice to see Lee Scratch Perry make another appearance half way through ‘Space And Time’. It was almost a little awkward at first as it seemed like forever before Ashcroft even knew he was stood behind him…. until he placed his hand on Richards head. A pure movement in time, touched by the hand of a God.

By now Ashcroft was in to his white ‘I ❤️ Manchester’ t’ saying “this is an epic tune” dropping straight in to “They Don’t Know Me”. Not many people can pull that off and get such a rapturous applause from fans.

One thing I’m going to mention again as it’s the main thing that stands out from Ashcroft performance tonight – he really does play and perform likes it’s his very last show. It’s a quality you don’t see much these days and would love too see more bands adopt this trait. Top marks sir!

As Richard rattled through his mixture of his classic Verve anthems, older and recent solo material, there was so much love in the air. Maybe it started with Lee Scratch Perry 60 minutes prior but whatever started it… it continued throughout the night.

Closing with and 8000 singalong with ‘Bitter Sweet Symphony’ it really was a bitter sweet moment…. the end of a spectacular show. If you’re yet to see Ashcroft perform – DO NOT… put it off any longer. Who knows how many albums he has left to tour.