Ocean Colour Scene, deliver an early Christmas present, in a masterclass of Indie rock at its best!

Ocean Colour Scene, the stalwarts of 90’s Britpop nostalgia, take to the stage for the second sold out evening at Manchester’s Albert Hall.

The support act for tonight may have surprised a few people, Martha Reeves and the Vandellas, of legendary Motown fame. I would love to know how this deal went down? How it was set up? Who came up with the idea? Who cares, it was a master stroke, pitching one of Motown’s true legends as warm up for tonight’s show. 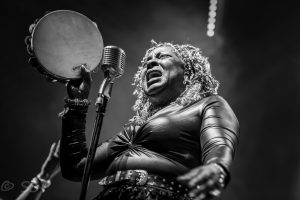 Now in her 77th year Martha took to the stage to roll back the years, with a large band behind her and the latest ensemble of backing singers, The Vandellas. It was a 55-minute masterpiece of classic songs and stories, opening with “Love is Like A Heat Wave” and her very first recording “Come and Get These Memories”, the Gospel gravel in her voice was right at home in this majestic venue, a medley tribute to Aretha Franklin led into Nowhere to run too. ” Jimmy Mac” had everyone singing along, before finally finishing with “Dancing in the Street”. I am sure if it was broadcast outside, they would have! What a pleasure to watch a set by such an incredible artist.

Coming on stage with the oh so recognisable OCS backdrop and immediately launching into the unmistakeable riffs of the “Riverboat Song”, the band seemed to say, “you can have this one as an opener, we have plenty in the locker”, this they certainly did.

The Birmingham band’s story is already the stuff of legend: a rip-roaring Indie-rock odyssey set to a backdrop of Nearly 30 years of UK pop culture at its very best.

The evenings set was strewn with crowd pleasing classics, played by a band who seemed intent on reviving that smouldering alternative indie rock they became famous for, “Profit in Peace” is as prolific an anthem today as it was when it was written, coming on the back of the opening number, it had the crowd in full vocal accord. “The Circle” keeps the momentum moving forward, Oscar was the driving force of the band’s rhythm, a powerhouse of percussion, especially during “Everything Comes At The Right Time”.

There is no stepping out of the box to try and impress the fans, this is just what the loyal and dedicated fans have come for, Simon Fowler still has the vocal delivery that that draws you into every verse. “You’ve Got it Bad” and the ever so fresh “Travellers Tune” make way for the highlight of the evening so far, the undeniable strains from the impeccable guitar work of Steve Craddock, leading us into “Hundred-Mile-High City”, has turned the volume up to 11.

Craddock is one of those guitarists who doesn’t get the accolades he rightly deserves. Have a look at the list of people he has worked with, it puts him in a great place. What a way to end a set… guitars, drums and vocals all in full flow.

Coming back on for the encore the pace is brought down as “Robin Hood” takes hold quickly followed by “Another Bard May Chant”. Finally, the last song of the evening was well not predictable, but it was the only one of the big hitters missing from the set. “The Day We Caught The Train”, was a perfect curtain caller, delivered to a crowd who had received an early Christmas present, by a band who made sure everyone got what they asked for.

Tonight, OCS delivered a set that showed they are much more than a one album band. Next year sees the 30th anniversary of the band and a new album is being promised. So many bands and artists have clearly been influenced by a band who are as respected today as they have ever been.