Whilst the rain poured, the lads played a mixture of classics and new material to a damp but high spirited crowd.

Coming out to Room in My House, it looked liked the lads positioned themself closer together than normally on stage, definitely making for what looked like a more close nit band, not just Rick as a frontman. It was actually quite nice to see.

After rattling off Room in My House and Dolphin, Rick addressed the sodden crowd with ‘Who remembers the 90’s’, picking out a young chap called Alex, in the front row who was about 10, give or take.

Rick. Bet you were too fucked weren’t you…..? 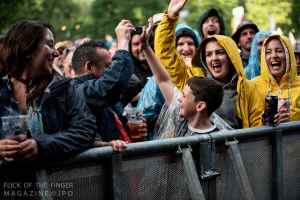 …which was met with a rapturous crowd laughter which also lead in to a chant of Alex, Alex, Alex, to which and rightly so, he lapped it up and as if by some miracle, a rainbow then appeared. You couldn’t have made it up. Pristine timing.

Moving on to a fan favorite, Going for Gold, which provoked a mass sing along the rain continued to fall however, at this point not 1 person in the 25,000 strong crowd seemed to mind. Not only a mass sing-a-long took place, but a few lucky people had the pleasure of getting some microphone action as Rick leans in to the crowd.

Shed Sevens new material slots seamlessly into their set like its been there for 30 years, the second of which came in the form of Better Days. Still has that 90’s feel but with a modern twist – it definitely works on the big stage too.

For a band that been playing together for the best part of 30 odd years, they display no sign of slowing down, full of energy, engaging with the crowd, attracting just as many new, younger fans as well as satisfying long supporting fans with classics and supplying new material. It would be quite easy to name other bands who are still performing and still playing the same old 30 year old songs. Great to have you guys! Thank you for the music!