The annual Download Festival, once again at Donington Park Circuit, took place this past weekend. 2019 line up saw a host of rock and metals heavy weighs along with numerous artists that fit in more niche genres. Flick Of The Finger sent Katie Clare off to the Midlands to take on the mud and report back.

There is no festival quite like Download and Download Festival 2019 was no exception. The weather tried its best to make things as mucky as could be. While the rain succeeded in creating a lot of mud and giving our balance skills a workout, however, it didn’t quash the Download spirit.

Although Download opens its doors from Wednesday the main music action kicks off on Friday. The clouds have broken up sharing a blue sky only peppered with short showers. The state of the weather and land is all secondary today as Pengshui opens the Avalanche Stage. 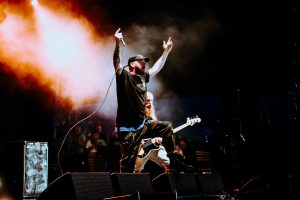 The grime, punk and metal melting pot in which Pengshui stir up an impressive synergy of tenacious electronic basslines, brutal rhythms support’s their visceral vocals. The tent, complete with an overspill stuck outside squinting for a peek, soon becomes half circle pit: Pengshui’s energy has everyone bouncing with a mix of intense frenzy and jovial grins. By the second time, the chorus of Nobody Cares comes around the second time the whole audience is joining in. Outstanding, Pengshui, outstanding.

Man With A Mission, fill venues without trying in Japan, and today they have filled their Download stage in the same fashion. This time for a more intimate experience. Wearing their usual wolf personas less distracting than you think after the first couple of tracks. The band members own uniqueness’ and quicks carrying through the fur. With some vast pop melodies, math rock composition and a bit of nu-metal bounce Man With A Mission have themselves and all in the audience a real party; bringing Ali Tabatabaee and Matty Lewis from Zebrahead along for a track. 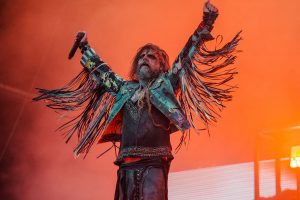 One hell of a crowd has amassed for shlock’s granddaddy Rob Zombie, arrives on stage in certain lights appearing to have taken on a field of mud by himself and won. Zombie’s infinite energy, engaging personality and the groove-heavy metal he delivers is absorbed with delight. Alongside macabre horror visuals, we are treated to the classics such as Living Dead Girl to the more bizarre Well, Everyone’s Fucking In A UFO. Ferociously entertaining and creatively impactful it was a perfect Friday night frenzy.

Black Futures deliver an immersive experience of anarchic yet celebratory industrial punk. While, the theatricals of boiler-suited flag waving, crowd interacting extras is all very splendid, it’s not all that Black Futures have to offer. Black Futures hefty riffs play alongside anthemic vocals creating a pretty euphoria vibe considering the immenseness of the industrial elements that run throughout their set. Can’t wait for more Black Futures, lots more. 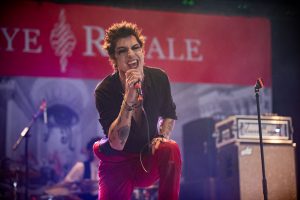 Palaye Royale shows are an explosion of energy akin to having set light to the stoke in a firework factory. For Download, they take things even higher. Sebastian Danzig unable to resist is perched atop the front speaker before the first strain of You’ll Be Fine. Remington Leith not to be outdone is a burst of adrenaline with a wealth of visual flamboyance and reckless physicality. A dynamic and fun set that truly allowed you to cut loose to some rock n rock swagger mixed with the exigency of punk rock.

Jason Butler, Stephen Harrison and Aric Improta aka Fever 333 heavy sound are created with glorious purpose and impressive energy. From emptying a water barrel, entering and crowd surfing to leaping from speaker to speaker and dragging entire drumkits across the stage; there was a barely moment without visual stimulation. In the pit the frenzy of bodies bashing into each other while in centrifugal motion. 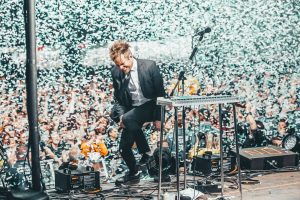 Smoke, flame throwers and confetti cannons are the cherries on the top of a black-suited Enter Shikari cake of perfection. The Avalanche Stage tent simply can’t hold the audience that spills far outside its edges. The show is even temporarily halted to request those who have taken to climbing the structure itself for a better view, to get down. Like the tiny warm-up show the night before at Nottingham’s Rescue Rooms the band dig into their back catalogue for something special. Opening with The Appeal & the Mindsweep I and Quelle Surprise the first not having an outing for four years, the latter six (if you exclude that Download warm up). Shikari keeps their set hot and heavy with Arguing With Thermometers, Slipshod and Anaesthetist. By the time we reach the quickfire round the audience is whipped up and happy to take it on with the same energy Rou Reynolds, Chris Batten, Rob Rolfe and Rory Clewlow are displaying on stage. Genuine, authentic and masters of any stage big, small or tented: Enter Shikari are worth all the rain, mud and lost boots.

Once again so many great bands, events and moments at Download Festival 2019 – well we expected nothing less – we could go on but these were simply some of my highlights.  All ready for Download Festival 2020? We are! Great to know tickets are already on sale and we have a whole year to get excited.