Ol’ Black Eyes Is Definitely Back!

Supported by MC50 and The Stranglers, Alice Cooper kicked off his UK Tour with an almighty bang at Manchester Arena.

I knew the gig was going to a special one, it’s Alice Cooper, but I had no idea it would be that good. Two brilliant sets from the support bands got the crowd riled up and ready to go for Alice Cooper to take to the stage, accompanied by his incredibly talented band. As if seeing Alice Cooper isn’t enough, he was joined on stage by Nita Strauss, Chuck Garic, Ryan Roxie, Tommy Henriksen and Glen Sobel, who are some of the most talented musicians in their field, and it was just as jaw-dropping to see them perform live as it was to see Alice.

The band got themselves ready behind a giant curtain of those signature eyes, whilst two of Alice’s songs blared out of the speakers, with the drop of the curtain, and an almighty cheer, the band then kicked themselves into overdrive and began to get the crowd ready for action before Alice himself took to the stage. No messing about, he was straight into their first song, ‘Feed My Frankenstein’. What a performance to kick off their set. The band gave it their everything, and despite a few sound issues with the microphone, Alice Cooper was moving around like he did 50 years ago, despite now being 71. 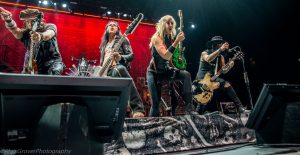 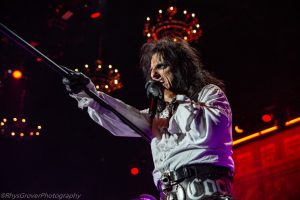 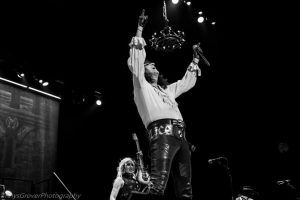 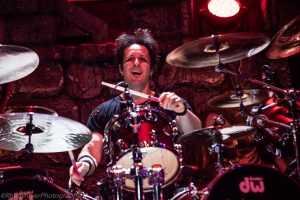 It was then into one of Alice’s most famous songs, ‘No More Mr Nice Guy’. A song I wasn’t expecting to hear so early in the set, but it was good for the fans to get a more familiar song so early in the set, it built the atmosphere to almost breaking point. The level of noise was incredible, easily one of the loudest crowds I have had the pleasure to witness, and easily one of the loudest bands I’ve ever seen live. It’s the perfect music to play at such an immense volume, so there was no reason to play it quietly, and I’m glad they didn’t.

The set continued with incredible performances across the board, and it was great to see Alice Cooper, a 71 year old man, roll back the years, don the thick, black eye makeup, and absolute smash a performance like that. What a way to kick off the UK leg of this tour. I think the best thing was, it wasn’t all about him. It may have been his show, but he frequently took a step back and let his band have the stage, and the fans loved it. Watching Nita Strauss play is like watching a miracle happen right before your eyes, her playing is effortless, her stage presence is up their with the best, and the way she interacted with the crowd whilst in the middle of a solo left me slightly dumbfounded. The same can be said for Glen Sobel too, he is one of the most talented drummers around. Whilst stage presence isn’t something that is easy for a drummer to do, there’s no forgetting when Glen is sat on the drum stool, he makes one hell of a racket, and looks bloody good whilst he does it. 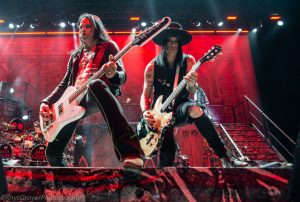 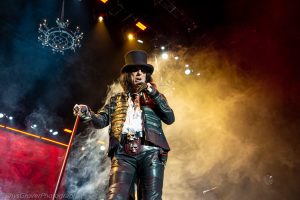 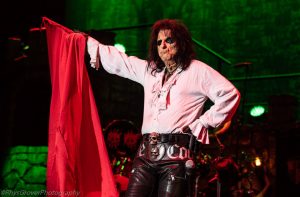 With the likes of ‘Poison’, ‘I’m Eighteen’ and ‘School’s Out’ being in the mix, along with the aforementioned ‘No More, Mr Nice Guy’ and ‘Feed My Frankenstein’, the set did not disappoint. In all honesty, there isn’t a bad word that could have been said about the performance which Alice Cooper, and his band, put on.