On what was a cold November night, Rival Sons bring their own brand of blues/rock n’roll to Bristol.

Unfortunately, I wasn’t able to catch the last Internationale’s set, but did enjoy The Record Company, who put on a great performance.

From the moment vocalist Chris Vos appeared from the darkness using what appeared to be a vintage microphone/harmonica combination I knew we were in for a teal treat, I wasn’t wrong. The band hail from Los Angeles their music is a fusion of blues, and rock music, their set ended with I’m getting better [And I’m feeling it right now]. A great catchy song that had the crowd ready for Rival Sons. 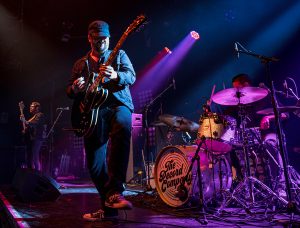 As the intro’ music filled the hall, Rival Sons appeared and  launching straight into End of Forever they had the audience captivated, hanging on to every note, as was to expected much of Feral Roots appeared in the set list. I enjoyed Burn Down Los Angeles from the Pressure and Light album. It was clear to see their was much audience participation for this, and from what I gather this too was a tour first, playing this track.  Front man Jay Buchanan commands huge stage presence and his powerful vocals carry well their own brand of rock n roll, not only this, but there’s much stage interaction with guitarist Scott Holiday. Drummer, Mike Miley played an incredible solo part way into the set.  The band slowed down a little later with Where I’ve been, from their 2014 album GreatWestern Valkyrie. I’ve always loved the title track of the album Feral Roots, the way it builds up, evokes so much emotion and this was clearly visible tonight. Closing the set was Do Your Worst, such a strong anthemic track and a great way to end a night, or was it?

It certainly brightened and warmed up a cold damp November night, however considering the guys are based in California I bet they wished they were in warmer climes.  For us though, a fantastic night of rock from three great American bands.