Skip to content
Live: Bullet For My Valentine Live In Manchester

Bullet For my Valentine bring an air of expectation to Manchester’s Victoria Warehouse.

It’s great to see the venue nearly full as opening band, Bleed From Within take to the stage. There’s no messing about, they are not here to make up the numbers, it’s clear they want to gain a few new fans, and clearly the mission to get the crowd going. They lean heavily towards power and delivery that really carries the crowd who are happy to unleash walls of death, the thrusting and stomping sees the band tearing through a set full of deep and meaningful barrage of metal.

Next up are a band I have been waiting to see for quite a while, TESSERACT. Only a few acts seem to capture the essence of modern progressive music in quite the same way that TESSERACT do. This is a band that have effortlessly climbed to a high platform in the industry after just four albums. The band is known for playing a sub-genre of progressive metal known as Djent which is a high-gain, distorted, palm-muted, low-pitch guitar sound. They use open guitar tunings and polyrhythmic riffs with multiple layers, setting a clear precedent for how to achieve groove, grace, and atmosphere along the way. In doing so, they have moulded what many would regard as the seminal benchmark for musical innovation and professionalism. 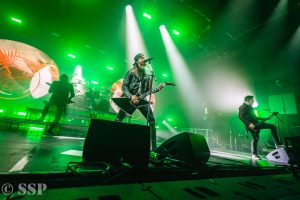 The crowd duly warmed up and atmosphere certainly heightened, BFMV come on stage as two huge backdrop screens lighten the stage, the band spread out to cover as much of the stage as possible, and immediately they set about getting around as much of the space as possible. First up is ‘Parasite’ and straight off, the crowd are a swirling mass of bodies, slam dancing into each other, in a frenzy, all in good fun. 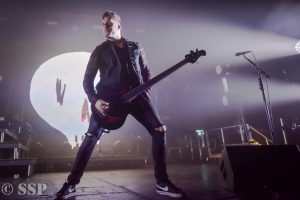 As the strains of ‘Piece Of Me’ has the masses fully engrossed with the band, Mathew Tuck lead vocalist and guitarist is co-ordinating the crowd like a conductor addresses his musicians. Old school BFMV fans are accommodated with a lethal and brutal version of ‘Shatter’. It’s raw and as the pace picks up with ‘Scream Aim Fire’, we see the band powering on at a relentless pace, there really is a deep edge to the band, a confidence and renewed vigour of delivery, following their Download Pilot headline slot earlier this year.

BFMV end a much-needed Heavy Metal hammer that seems to have been missing from the current tour circuit, going out with, “Tears don’t fall”, and the absolute heavy banger “Walking the Demon”.

Many fans will have wet their appetite for some of next years Heavy Metal festivals.